YouTube has just launched a new portion of its site dedicated to HD content, allowing users to easily browse through what is now the largest archive of high definition content on the web. The move has been a long time coming – in the last few weeks the site has been gradually building up to a large scale HD launch with the introduction of a 16:9 video player and the ability to watch HD on selected videos, but until this point it has been difficult to separate the HD content from videos encoded at YouTube’s normal resolution.

In conjunction with launching the new HD section, YouTube has also started displaying HD movies in a large video player that takes up nearly the entire browser window without going into the sometimes-annoying full screen mode. To see a demo of the new player in action, check out the Where The Hell Is Matt Video.

YouTube has also released a set of topical portals related to News, Music, and Movies. Each portal uses a different set of data to surface the most popular YouTube videos of the moment: News culls recent news videos from Google News, while Music monitors popular playlists, rising songs, and artists. Perhaps most notable is the Movies portal, which features movies from both the site’s studio partners (like MGM) as well as indie films.

Along with the full launch of HD and the larger player, the new Movies section marks YouTube’s biggest step towards taking on sites like Hulu. While users have been able to search for movies in the past, YouTube’s new portal offers a more comprehensive listing with a sexier interface and spots for ‘featured’ films. Don’t be surprised if they a launch a similar portal dedicated to Television shows in the near future (in October the site rolled out full-length shows provided by CBS). 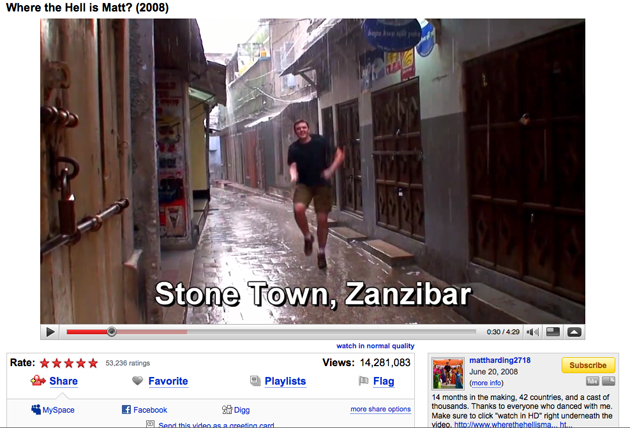