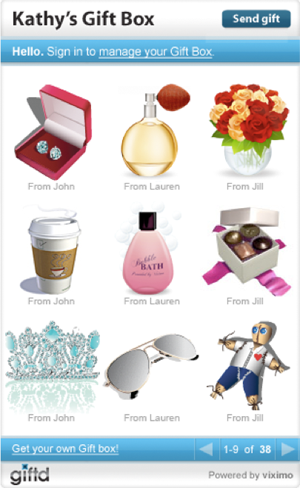 Virtual gifts have been fairly popular on social networks like Facebook, which offers a library of hundreds of gifts, most of which sell for a dollar (a few of them are free). But these gifts are generally all tied to the network they were purchased on, which means you can’t display the same giftbox in a different social network or on your blog. Viximo, a startup that offers websites a turn-key solution for virtual goods and gifts, has released a consumer facing site called Giftd that allows users to create virtual giftboxes that can be embedded nearly anywhere on the web.

The site offers a store filled with digital gifts, many of which feature full animation, sound effects, and some degree of user-interaction (for example, clicking on the six pack of beer will let you ‘gulp’ down drinks). Gifts are purchased with Giftd credits, which run around $3 for 15 credits, with most gifts costing between 2-5 credits.

Gifts are displayed in embeddable Flash widgets, which can be placed in most blogs, homepages (like iGoogle and Netvibes), and social networks including MySpace and Multiply. The big exception: Facebook, because it doesn’t allow for embedded Flash.

So will Giftd catch on? The concept of a transportable virtual giftbox isn’t a new one – other startups have developed similar offerings. The real differentiation is in the content, which is where Giftd may excel – its gifts have high production values, which can be attributed to Viximo’s growing community of artists. But even with the high-quality icons, Giftd will still have a hard time competing with the native gift stores that are increasingly common on social networks (Hi5 just launched one, and MySpace has one in the works).