Facebook long ago passed MySpace in global visitors and time spent on the site, but now it appears to be gaining ground on Google.

A couple days ago, Facebook released some new statistics on user growth and engagement on the site. It now has more than 140 million active users, 70 percent of whom are outside the U.S. The number of active users added each month seems to be accelerating, only half are in college, and the fastest-growing demographic is 25 years and older.

There are now 52,000 apps on Facebook, created by 660,000 developers. That’s a serious platform. Some of the user engagement stats were also particularly interesting:

* Average user has 100 friends on the site
* 2.6 billion minutes are spent on Facebook each day (worldwide)
* More than 13 million users update their statuses at least once each day

How does this level of engagement compare to other large sites? These are global numbers so let’s start there, with minutes spent on the site, which is the way comScore measures engagement. According to the most recent global data from comScore, which is for October, people spent 33.9 billion minutes on Facebook (up 19 percent from September), compared to 41.6 billion minutes on Google (up 3.6 percent) and 18.5 billion on MySpace (down 2.5 percent). Yahoo is still heads and shoulders above everybody else with 120 billion minutes. And in terms of actual visitors, Google still has nearly four times as many monthly visitors worldwide as Facebook. 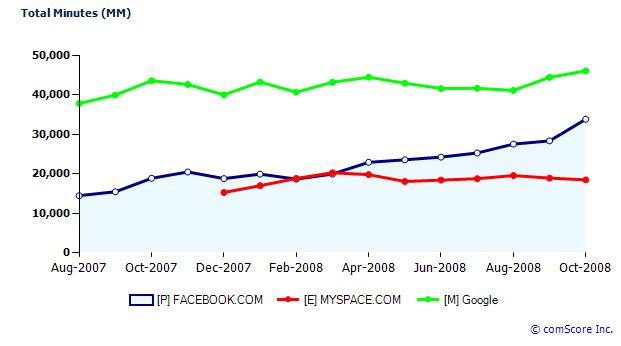 In the U.S., the gap between Facebook and Google in terms of time spent is much closer. ComScore has November data for the U.S., and it estimates people spent 8 billion minutes on Facebook during that month, versus 8.5 billion minutes for Google. MySpace was about double with 16.4 billion (it also had more visitors than Facebook in the U.S., with 75.5 million vs. 50.5 million). 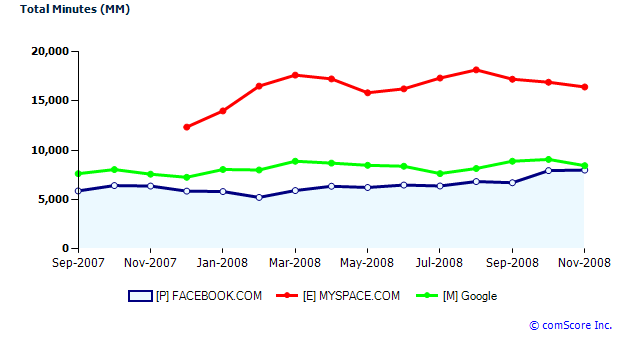 Some might argue that it makes no sense to measure engagement for Google, since it’s stated goal has always been to send people away from its site as fast as possible. But that’s only for search, and even there Google wants to send you away only to draw you back. With its apps and other sites (Gmail, Google Docs, Youtube, Orkut, Google Docs), engagement is most definitely the name of the game, so it is a fair comparison.