The race is on between sites like Hulu and Joost to bring video content to the web, but as this content becomes more ubiquitous it will be the sites that go beyond basic video streaming that will ultimately be able to differentiate themselves. Watercooler, a development house behind several hundred community-based social network applications, is one company that is positioning itself well for this upcoming face-off. The startup has built up a community of 16 million registered users spanning its TV-centric applications on MySpace, Facebook, and other popular social networks, and has now signed deals with Hulu and Joost that make it one of the first sites on the web to offer content from every major TV network.

Watercooler launched its apps over 18 months ago (long before getting rights to any video content), offering an array of applications that allowed TV fans to interact in an environment focused on their favorite shows. Each application offers discussions, games, and other social content relevant to a specific show (for example, you can find the Addicted To Heroes app here on Facebook). But recently, Watercooler has made strides to take these social communities to the next level.

In October the site signed on Hulu to provide video for its applications, and last week the site launched its own video portal, TVloop. Today, Watercooler has added Joost to its list of partners, which means it now has full length content from Viacom, CBS, Fox, NBC, ABC, and the CW – a feat that CEO Kevin Chou says is the first on the web.

Watercooler isn’t offering every piece of content from these networks – instead, it only presents shows that have corresponding Watercooler applications (though the hundreds of apps available encompass most popular shows). And Chou says that the company isn’t setting out to take on the likes of Fancast or Hulu, but is instead looking to offer a complete package merging both a social community and the video content itself. Other sites may be able to match its video library, but building a thriving social community of 16 million (a third of whom are active on a monthly basis) is not something that will be easily reproduced – Chou says that competitors like Mesmo and TV.com still have only a small fraction of those numbers.

Another video portal looking to differentiate itself is Sling.com, which features integration with Sling’s popular video-streaming devices (you can see our initial review of the site here). 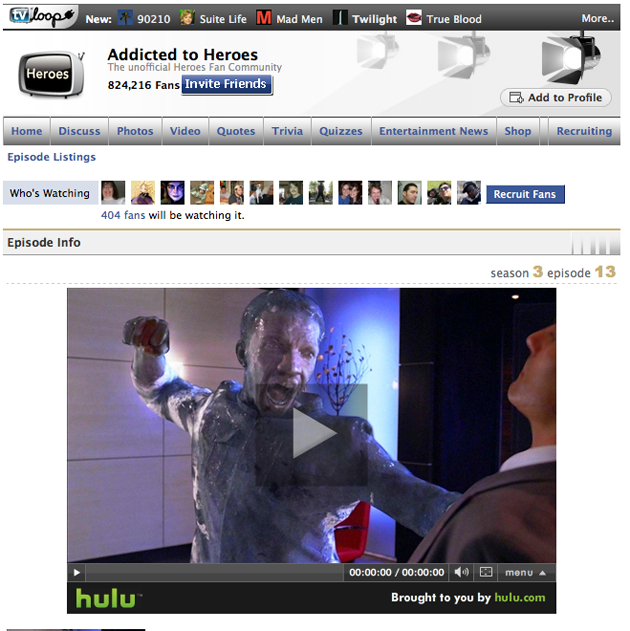