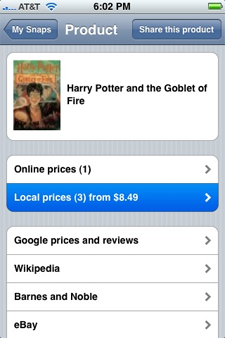 SnapTell, the awesome iPhone app that lets you take a photo of nearly any CD, DVD, book, or video game to get instant product reviews, has just released an upgrade that introduces a number of useful new features.

Most significant is the addition of local and online price comparisons through TheFind, which allows you to get a quick look at what the item you’ve photographed is going for at local retail stores as well as on online sites like Amazon. It seems to work fairly well, though I wish it had a more comprehensive price listing (a query for one of the Harry Potter books found only one online price, though it did find the book at a number of local stores). You can download the app on iTunes here.

The upgraded app also includes a number of UI changes (the ‘take photo’ button is now centered, as opposed to hidden up in the corner of the screen), and seems generally snappier.

Since launching a month ago, SnapTell has seen over 200,000 downloads and has been as high as #16 on the free apps list (which is frankly lower than it probably should be). And while a large portion of users are probably just trying out the app for the novelty of image recognition, SnapTell says that around 35% of its installs see repeated use, and that it has a 15% click-through rate to online stores.