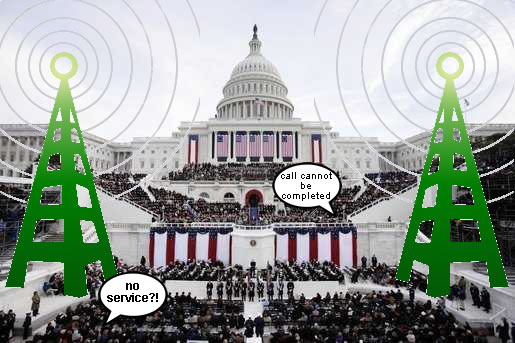 In 33 days, President-elect Barack Obama will be sworn in as the 44th President of the USA.  What does this have to do with mobile?  Well, with a ginormous-sized crowd expected to attend Obama’s inauguration, a spokesman for the CTIA warns that cellular phone systems around the National Mall in Washington, DC could be overloaded under such conditions.

Sprint and Verizon are two wireless carriers in the D.C.-metro area spending millions of dollars to add capacity to their cell sites ahead of Obama‘s inauguration.

In an effort to better accommodate the increased network use, Sprint will utilize COWs (Cellular On Wheels) and COLTs (Cellular On Light Trucks), equipment generally reserved for national disasters, to assist with the heavier than normal volume.

Still, there is a major concern that the increased cellular traffic will interfere with critical/emergency communications.  However, first responders will be provided with a priority access code enabling them to push their high-priority calls through.

If you were planning to mobi-cast Obama’s speech to friends and family via your cell, I’d suggest you reconsider and bring a video-capable camera to capture the historic event instead. Also, as a general rule of thumb, text messaging may be more effective on an overwhelmed network.  Check back for my post-inauguration mobile conditions follow-up, as I will be one of the hundreds of thousands of crazy people in attendance on Jan. 20, 2009.