Foodzie, an online marketplace for high-end artisan food vendors, has raised a seed round of $1 million from noted investor Jeff Clavier of SoftTech VC, First Round Capital, and a number of angel investors. The company, which we were introduced to over the summer as part of the TechStars class of 2008, recently launched to the public with a marketplace of 25 vendors ranging from Vermont and California cheese makers to specialty BBQ sauces from Smokin’ Joe Jones.

Foodzie helps provide a centralized hub for these small food vendors, giving them more exposure than they’d get from their standalone sites and making it easy for food aficionados (or ‘foodies’) to find the products they’re looking for. Foodzie generates revenue by taking a commission on each transaction (around 20%), but vendors still make as much as double what they’d get if their products were sold in traditional specialty food sites. Foodzie can charge a lower commission because it doesn’t warehouse the items it sells – instead it handles all of the transactions (a boon for less tech-savy vendors) and leaves distribution up to the individual stores.

Given the economic downturn, it seems like high-end food would be among the first “cuts” made by consumers in an effort to cut back on spending. However, Foodzie CEO Rob LaFave says that the recession doesn’t seem to be having a major impact on the marketplace. He explains that many of the products on Foodzie are actually cheaper than those in supermarkets, and that many customers come to Foodzie looking for foods they can’t find elsewhere that fulfill special dietary needs (like vegan or gluten-free products). 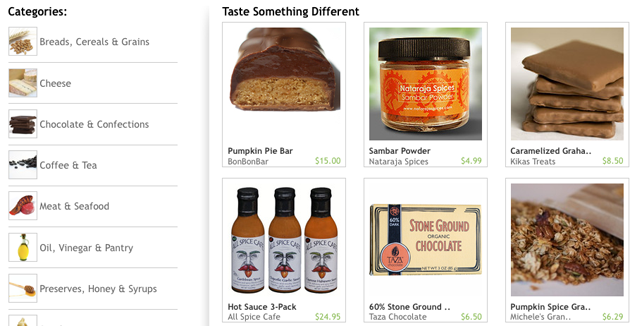