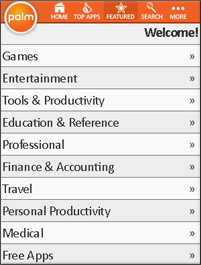 With “App Store”, “Market”, and “Application Center” all spoken for, Palm’s going with “Software Store”. With that, the store name tap is just about all dried up.

Unlike the aforementioned others, Palm’s not toughing it alone. Palm has called on PocketGear, an app distributor which has rounded up around 50,000 smartphone applications since launching in June of 2008, to power the boutique. It’s a bit strange to see a handset manufacturer so openly sharing their application store’s spotlight with a third party, but it ensures that Palm’s got a full catalog on day one. At launch, over 1,500 developers have already submitted their virtual goods to the Software Store

Of course, bringing in third parties means more hands in the cookie jar. Whereas Google and Apple are both giving developers 70% of the cut and RIM has upped the bar to 80%, Palm is cutting it right down the middle: 50% of gross revenue goes to the developer, and 50% goes to the other parties involved.

Might this smaller cut limit developer interest? Perhaps. But Palm has one strength here: their device lineup. Of all the on-device application stores currently up and running, Palm’s got the widest array of handsets. Apple’s got three (iPhone/iPhone 3G/iPod Touch) and, until more Android devices start rolling out, Google’s only got the G1. At launch, the Software Store is already pushing purchases to over 25 Palm devices.