uvLayer, a startup that has built an intuitive webtop for sharing YouTube videos and other media, has launched the latest version of its site which introduces a host of new features, including support for more IM networks and Flickr search. uvLayer has slipped under our radar until now, but their product is impressive, allowing users to search for and organize media much as they would on their computer’s desktop.

These ‘desktops in the cloud’ (called canvases by the service) can be made public, allowing users to browse through the media you’ve collected in an organized manner. These canvases are useful for purposes beyond pure entertainment – for example, teachers can organize videos into appropriate lessons folders for their students.

uvLayer also includes support for sharing individual videos over IM. The site has integrated with major chat networks including AIM, Yahoo, MSN, and Gtalk, making it a simple process of checking off user names when you’d like to share a movie clip or photo with some of your friends. 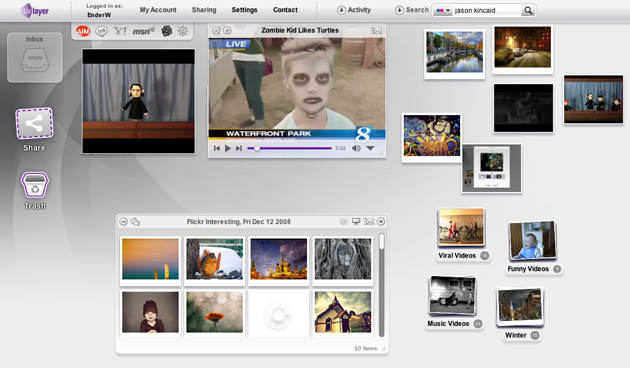 The company first launched in January with an application based on Adobe’s AIR platform, but soon moved on to develop a version that could be run directly in the browser with Flash. The AIR app is still available, but doesn’t add much beyond allowing users to watch movies outside of their browsers (there’s also some integration with Facebook, but this functionality will likely be coming to the Flash version soon).

In the future the company hopes to adapt its technology to touch screens and to a wider array of devices. But for now, it still has some work to do – while the interface is great, the selection of content sources is very small (sites beyond YouTube and Flickr will be integrated in future releases). It would also be nice if the site supported user-uploaded content (everything on your webtop currently has to be hosted elsewhere).

There are a few other sites working on similar webtop interfaces, including Wixi, a TechCrunch40 company covered here.