Imagine Netvibes for group project management and you get a sense of Producteev, a bootsrapped startup that launches at the LeWeb conference today. The first 500 people to request a code here will receive invites.

I got a demo of the service last week from founder Ilan Abehassera. Producteev starts with a grid of blank boxes on a Web page. Each box represents a different project to which you or other people you work with can add tasks. One box could be product development, another one could be a marketing project, a third could be an event. You can set permissions on who can see a given project on a box-by-box, project-by-project basis.

Each task has a status (pending, active, done, etc.). For any task, reminders can be set and comments can be added. Tasks can be sent directly to Producteev via Twitter, email, or IM (Windows Live, Messenger, AIM, or Yahoo Messenger). You can also be notified through these channels whenever a new task is assigned to you, a new task is added to a project, a comment is made to one of your tasks, or the status on a task has changed. One of the issues with this beta release is that when you Twitter in a task (or IM or email), it doesn’t go automatically the appropriate project box. Rather, it goes to a general inbox, and later must be relocated to the right project once you log in.

Producteev also has a calendar view and a Live Feed view, which streams the activity associated with every project you are monitoring. The service also includes a private messaging system and file sharing (with a 2MB-per-file limit). During the beta period, which will last through March, Producteev will be free. Afterwards, up to three users will still be free, but anything beyond that will incur a $1/user/month charge, with extra charges for unlimited file storage or the ability to customize the look and feel of Producteev with your company’s logo. Abehassera will also be launching a $2 iPhone app, with Blackberry and Android up next). 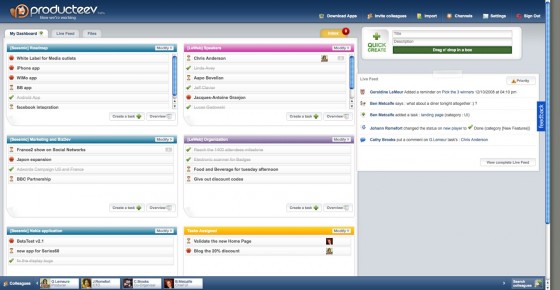 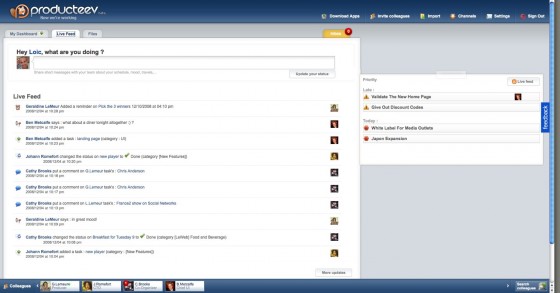