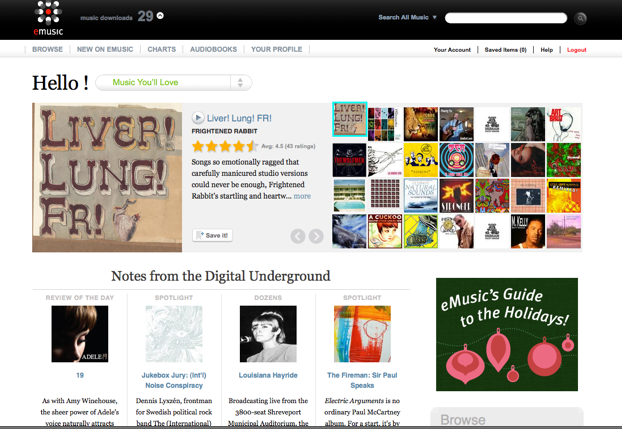 Indie music download subscription service eMusic is getting an overhaul. Individual artist an dalbum pages already have more of an AJaxy feel and incorporate YouTube videos and Flickr photos. On Friday, its homepage switched over to a new design centered around a new recommendation engine powered by MediaUnbound. Now, when you sign in as a member, you are presented with a grid of “Music You’ll Love” made up of personalized recommendations. You can also sort by “New Arrivals,” which tries to give you new music that you will like, as well as standard “Best Sellers” and “New and Noteworthy” albums selected by eMusic’s editorial staff.

Helping members find new music they will love is the key to eMusic’s business, and it needs to do a better job. eMusic has 400,000 paying subscribers who have downloaded 250 million songs since 2003. Members can download anywhere from 30 to 75 tracks a month before they have to start paying on a per track basis. Once people stop finding new music they want, they are more likely to cancel their subscriptions. Better recommendations would reduce that churn.

eMusic wants to be your hipster friend who tells you about the latest, greatest bands before you hear about them anywhere else. “How do we act like that hipster friend or that corner record store?” asks senior vice president Jack Welde. He argues that the new recommendation engine will help them do that.

On the algorithmic side, the recommendation engine looks at every action you take on eMusic, including searches, listening to 30-second previews, saving albums for later, and actually downloading albums. A download is weighted more than a preview. It builds a model for each member that takes into account genre preference, popularity interest, newness interest, experimentalism and expertise. MediaUnbound also takes into consideration global music preference patterns across P2P networks, Web radio, blogs, and other MediaUnbound music customers.

How are MediaUnbound’s music analysts different from the ones who classify music at Pandora? MediaUnbound CEO Michael Papish answers me via e-mail:

Pandora has created a feature factory of humans chained to headphones attempting to objectively rate the sonic features of every song ever made (well, ok, only ~200k hand-picked songs). We think this is a horrible use of use of the creative, constructive, opinionated, and (sometimes argumentative) resource called the human music geek.

In fact, he had the following critique for all the competing music recommendation technologies out there from iTunes to iLike:


—Pandora. Purely sonic-based as determined by team of human experts classifying every song into features. Not scalable. One-trick pony only able to determine that one song sounds like another song, not anything about user preference or other personalized recommendations.

—iLike. Purely algorithm-based utilizing only data from other iLike members. Service is meant to be embedded in a widget, not a full-fledged recommendation platform across an entire music service.

—Last.fm. Purely algorithm-based utilizing only data from other members and their scrobbles.

His critiques are more or less valid, but I’m not convinced he’s come up with anything better. With very limited testing, I found the recommendations to be hit or miss. I will reserve judgment until I play with it some more. If it is an improvement from before, then at least that’s progress.

But my big beef with eMusic is twofold: it offers an incomplete catalog (no majors) and you can only listen to a 30-second preview (unless you there is a YouTube music video available, which is embedded on artist pages—go figure). So I find myself toggling back and forth between sites with full streaming and eMusic to figure out whether I wanted to actually download an album. In an era when limitless ad0-supported streaming is now the norm, eMusic will remain a niche music provider. But if it can somehow figure out how to surface new music that no other service can, it will remain a valuable resource for hard-core music enthusiasts.

What is your favorite music recommendation engine and why?