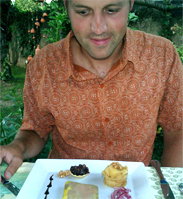 With iPhone app downloads having just blown through the 300 million mark, we jumped at the opportunity to talk to Ethan Lowry. As a founding member of the trio behind Urbanspoon, one of the most downloaded iPhone applications of 2008 , Ethan knows a thing or two about iPhone app downloads.

Who are you, and what do you do?

I’m Ethan Lowry, I’m one of the founders of Urbanspoon. We wear a lot of hats. My main brief is user experience and product design, so the front end of the service. Adam and Patrick are both hardcore CS guys. Because it’s just the three of us, we all also do whatever else is necessary. Adam’s our accountant, and I tend to do business conversations. This is my first IM interview, by the way. It’s interesting.

Do you guys ever have to call for outside help, or do you generally fair pretty well with just the three of you?

We have a couple of contract people to help with customer service, which is hugely helpful. We have occasionally brought on help when building out new cities, but we do most everything in house.

Is there any story behind the Urbanspoon name?

Hmm. Well, we threw out a bunch of words that were food related and local related. My wife claims she came up with the name. I won’t argue.

Heh – as long as she doesn’t start asking for royalties on the ad commission.

Exactly! I think she values the name at 92% of total worth

Speaking of ad commission – urbanspoon is a free app, but it has AdMob ads integrated. How’s that working out?

It’s working out reasonably well. For us — as three guys — ad networks make a ton of sense. We don’t want to have to put together an ad sales team, we’d rather focus on the product. AdMob has done the best job we’ve seen of creating an attractive standard iPhone ad unit and while of course we’re always pushing for more and better advertisers, I’d say they’re handling the iPhone surge pretty well

Would you say that ad units are a viable source of income for developers of free apps, then?

It’s a question of scale. Where I think Urbanspoon has been really strong is repeat usage. We have a lot of people using the app on a daily basis, so our available advertising real estate is big enough to bring in real revenues. The ad model is pretty similar to what we’re used to seeing on the web, at least for now. I think advertisers may start to discover different ways to take advantage of the mobile world soon, but it’s still in its infancy.

Advertisers are pushing their own iPhone apps, and a very few take advantage of the location-based nature of mobile, but for the most part they are still thinking about the iPhone as a small-screen web page. I think that will change. Mobile has immediacy, location, intimacy — a bunch of things the web is missing. Over time advertisers and publishers will figure out how to take advantage of all that. To be honest though, we’re not putting much effort into that — we’re more interested in user-facing features, at least for the foreseeable future.

Can you reveal how many downloads you’ve had thus far?

Very impressive – what about shakes? [A notable feature of the Urbanspoon iPhone app is its “Shake” screen – you tell Urbanspoon which nearby city you want food in, what type of food you want, and the price, and then physically shake the device. Urbanspoon will dig through its database to find a random restaurant that matches your criteria. If you leave any of the criteria unspecified, it’ll randomize that as well.]

Checking…. wow. More than I thought: 70 million. Also, we just extended our coverage. For the longest time the only big complaint we’ve gotten about the app was, “you don’t cover my city!”. Over thanksgiving we rolled out “Urbanspoon Everywhere”. [“Everywhere”] is an exaggeration, but we do cover everywhere in the US and Canada. The people who’ve downloaded so far had to be in one of our supported cities

Did you cover Canada before the update?

We covered Toronto, Vancouver, Montreal and Calgary, but now we also get smaller places like Victoria and Saskatoon. Urbanspoon Saskatoon.

How has adoption been in Canada, as compared to the states?

It’s been good — a ton of iPhone usage in Toronto, and before we rolled it out Montreal was our most requested city. On the web the Canadians have been great as well. Our biggest cities are still places like New York and LA

The Urbanspoon app was featured in an iPhone commercial – what was that like?

It was wonderful. Apple plays its cards very close, so we didn’t have much advance notice and the first time we knew for absolute certain we were going to be in the ad was when someone saw it. When I turned on the tv the night it started and two minutes later our ad came on that was a pretty amazing feeling.

The commercial has made a big difference in traffic, definitely.

So Apple never really came to you on the matter, it was sort of just “Hey, we’re putting Urbanspoon in a commercial.”?

Well, there was a little bit more than that. They said, “we’d like to do some marketing, can we use Urbanspoon’s logo?” YES. Then they said, “we’d like a demo version of the app, can you give us that?” YES! And then finally, “we’re shooting a commercial, can you make these tweaks?” ABSOLUTELY!!!

Heh – certainly not something you’d want to let pass you by.

No, though we didn’t know what kind of gains to expect. The commercial has exceeded our expectations. On a typical day during prime time, when a commercial runs we’ll see a spike in traffic up to maybe 5000 “shakes” in a minute.

Any plans to expand the application to other platforms? More specifically, any plans for the Android port many are clamoring for?

Yeah, both Android and RIM are things we need to do. The biggest question for us is where can we get sufficient exposure to justify applying our limited resources

Are they works in progress, or future goals?

We’ve done some initial research and experimentation, but they are still in the future

Ah – I anxiously await it.

Do you have a preference?

Yep. I’ve got a ton of faith in Android, but not so much the G1.

Apart from the google name, what’s the biggest draw?

The idea of a royalty-free, opensource OS. I feel that the mobile market is a mess right now because of how many horrible proprietary platforms there are.

I agree. 10 years ago all three of us worked at a mobile startup, Avogadro (later acquired by Openwave), and at that time we were all talking about the things that are happening today. It’s all made sluggish by the challenges of operators and handset manufacturers. Apple neatly sliced through that with the iPhone, which is stirring some action. I’m still somewhat skeptical about Android, though. I hope it works, but there are two challenges that don’t seem to be addressed adequately

First, the platform doesn’t eliminate the need for an elaborate test matrix. Once Android is on many phones, each may have variations in screen size and capabilities and each environment can be tweaked to differentiate for the carrier or the handset maker. That’s tough for a small company like ours. At openwave they had floors of the building dedicated to teams specializing in particular handset/carrier combinations. Excruciating.

The second problem is promotion. Google provides a great way for sites to get discovered on the web: search. But search isn’t as appropriate a tool on a small screen, difficult input device. Apple is refining the App Store and put a ton of hype and marketing muscle behind apps on the iPhone. The equivalent remains to be developed on other platforms. I’m not convinced yet.

Beyond promoting the apps, how well do you think Apple has handled the App store so far?

While there’s still a ton of room for improvement, I think it’s inspired. We’ve seen that people in general are downloading our app on the device, not nearly as much through iTunes, so providing a centralized model for finding apps while you are playing with your phone is just brilliant.

What sort of things could be improved?

Well, they just made one improvement, at least from our perspective, by providing a way to browse for the most popular apps in each category. The top level “what’s hot”, “what’s new” and “top 25” lists all favor new apps, but it’s important to have a structure that will allow apps to get noticed and then stay accessible on the device. Before that wasn’t possible. I think in general they are going to have to continue to strike the balance between exposing new and fast-gaining apps while still showcasing established winners, without making it feel like there’s no way to crack in with a cool new idea.