When UserVoice launched its hosted solution for companies looking to harness user feedback a little over 7 months ago, we wrote it could well be a replacement for e-mail when it comes to aggregating opinions, ideas and suggestions from user / customer bases. Now, UserVoice says its offering is solid enough for enterprise usage and is consequently dropping the beta tag. 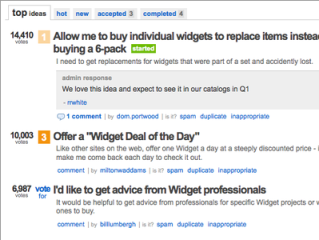 Billing itself as an ‘online suggestion box that sorts itself’, UserVoice enables companies to embed widgets onto websites and applications to sollicit feedback from users in combination with a Digg-like voting feature. The idea behind that approach is that it’s easier and more scalable to crowdsource user opinions, ideas and suggestions than other ways of communication.

You can use the UserVoice service for free, but with a rather big limitation on features. More advanced packages are available starting from $289 per month, and there are also special packages for startups, non-profit organizations and educational institutions. If you want to take a look at alternatives, you might want to check out similar service providers such as CrowdSound, Suggestionbox and Get Satisfaction.

UserVoice has attracted customers from various sizes so far, including nice references like Sun Microsystems, Nokia and MySpace but also smaller web application providers like Blip.fm, 12seconds and Alert Thingy. According to the announcement, over 120 million widget impressions have already been served, with over 530,000 votes logged to date. Not bad for a startup that operates without outside financing apart from a small seed round from Nuvoiz raised back in 2007.

Bonus points for using Initech as the company for the live demo. Marvellous touch.