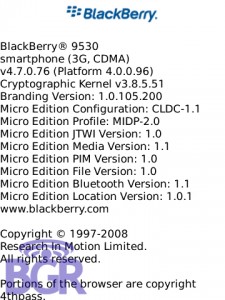 As if Thanksgiving left-overs and a bit of time off weren’t enough, Storm owners got a bit more to be thankful for over the weekend. After a somewhat shaky launch and a whole lot of complaints about some fairly rough bugs, RIM is set to release the first firmware update some time this week. Fortunately for those ready to throw their Storm out to sea, some folks at RIM (or Verizon, perhaps) decided to bring the goods a bit early for their more technologically apt crowd by leaking not one, but two firmware updates.

Anyone can nab the first leak, which comes in at version 4.7.0.75. Here’s the download link. As it doesn’t appear that any patch notes were leaked with the release, the list of fixes is all conjecture at the moment. In general, however, stability seems to be on the up-and-up.

The second and most recent leak, which bumps it up to 4.7.0.76, isn’t quite so easy to obtain. In fact, it seems that only the Boy Genius has managed to get his hands on it thus far and, for one reason or another, is holding on to it real tight. He does share a whole lot of details of what the update entails, however, and it sounds like it might be just what the Storm needs.