Overall, the numbers showed an expected but sharp decline: the percentage of U.S. visits was down 11% on Thanksgiving Day in 2008 compared to last year, and U.S. traffic on Black Friday was down 5%. But online-only (not brick-and-mortar) stores, of which there are 100 in the list of 500 top retail websites, had a pretty good run: the percentage of U.S visits to those shot up 11% on Thanksgiving Day, and went up 10% on Black Friday compared to 2007.

Still according to the Hitwise report, the top visited retail website on Thanksgiving Day was Walmart.com, receiving 13.72% of U.S. visits, while Amazon.com was the second most visited with 9.56% of visits. BestBuy.com came in third with 6.05%.

Amazon.com took over the lead on Black Friday, receiving 11.06% of U.S. visits among the top 500 retail websites. Walmart.com was the second most visited with 9.88% of visits followed by Target.com with 4.62%.

Update: Below is some more data from Coremetrics showing flattish activity at retail sites on Black Friday. Coremetrics tracks 300 retail Websites in detail, including shopping cart and order activity. Orders were completed in 3.5 percent of all sessions, about the same as last year, but the average order value ($126) was down 6.15 percent. Here are some of Coremetrics’ findings: 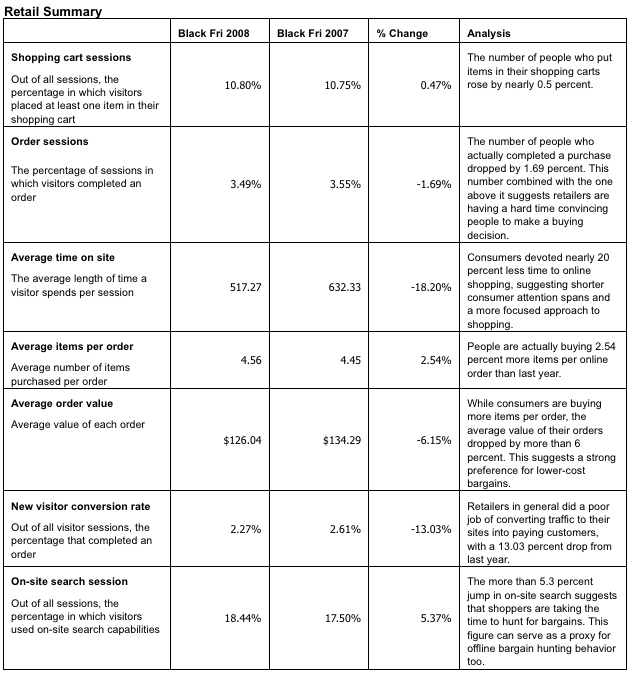