The debate about Netbooks, which are very small and very cheap laptop devices, is beginning to heat up. The category is only about a year old but sales are expected to top 5 million this year.

Lots of people think Netbooks are the next big volume market because they allow people who previously couldn’t afford computers to own one. People got so bullish on the devices that sales projections reached 50 million units by 2012.

I’ve had a chance to test many of the units, though, and I can say that the promise is much bigger than the payoff. Perhaps that’s why Intel is rethinking whether the devices are as great as everyone’s expectations.

A typical Netbook has a 7 inch screen, an Intel Atom or Via Nano processor, a solid state (flash) hard drive and a keyboard that’s 80-85% standard size. Most have Wifi. Some have other bells and whistles like bluetooth, a camera, etc.

I find Netbooks unusable for three reasons: they’re underpowered as PCs, the screen is too small for web surfing, and the keyboard is so small that effective typing is impossible.

The basic problem as I see it: Netbooks are designed to appeal to two very different markets – the price sensitive and the size sensitive. The two are really mutually exclusive.

Netbooks use Intel Celeron, Intel Atom, or Via Nano CPUs. All are x86 compatible, and they have great power usage. At best the devices have 1 GB of memory, and some make do with as little as 256 MB.

Most of these machines are running Windows XP or Vista. A few have some flavor of Linux. Combining that UI, even the lower end XP and Linux, with normal computing is a heavy chore for these machines. If you have an email application open and a couple of tabs in a browser, there’s a lot of slow down. One Vista machine I’ve been testing tends to crash after a few minutes of use.

This is not the computing experience that most people are familiar with. The Atom just can’t compare to a dual-core laptop when it comes to performance Anyone with an alternative will quickly be unhappy at how sluggish these machines are.

Then There’s The Screen

These machines have screens ranging from 7 inches on up. The worst thing about the screens is vertical resolution, which is generally 600 pixels. Even if you aren’t using a lot of toolbars and plugins on the browser that take up vertical space, they annoyance factor is high. This is, at best, how much of a web page you’ll see on the screen: 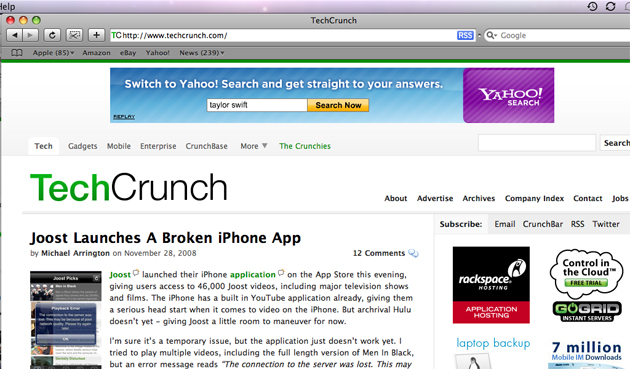 You are constantly scrolling down on these devices. You have to scroll down just to see the title of the first article on the NYTimes, for example. And unlike the iPhone, you can’t just swipe your finger. You have to use the keyboard or trackpad to scroll down, and it means taking your eyes off the screen. It’s annoying and, again, if you have a different device, you are going to stop using your Netbook.

Remember that the iPhone has 480 vertical resolution, and you can resize text to fit a lot of it on the screen. The image above shows 8 lines of text in the post (net of title, etc.). The iPhone shows 22 lines of text.

In other words, the iPhone or iPod Touch, with a tiny 3.5 inch screen, has a vastly better browsing experience than any Netbook (it’s faster too).

Then there’s the keyboard. It’s tiny – most of them are just 80% of regular size. Any normal adult can’t type fast on it without constantly hitting the wrong keys because there is no space between them. It isn’t much better than a Blackberry-type mobile keyboard when it comes to speed and accuracy of input.

Convergence Of Mobile And Laptop

There is a big fat hole in the market between mobile devices like the iPhone and regular laptops. But smaller, underpowered laptops aren’t the answer for the mass market. Most of the Netbooks aren’t much cheaper than very low end laptops (and those laptops have normal keyboard and much bigger screens).

The problem with Netbooks is they are trying to address two markets at once: emerging markets where price is very important, and developed markets where people want a second computer. The emerging markets don’t care about size, they just want it at a low cost – so offer them something that’s bigger and works better at the same price (remember, bigger = cheaper for most computer parts except the screen). Developed markets don’t care about price as much as performance, and Netbooks cut too many corners. Perhaps that’s why Netbook screens are starting to inch up to 10 and 11 inches. Which doesn’t really make them much different from normal laptops (and the prices are about the same).

So what’s the answer? Well, we have our own ideas. When you ditch the operating system and all it’s weight and focus on a device that runs a browser only (a true netbook), you can make do with mobile phone level hardware. Give people a big screen to really experience the Internet. Make it a touch screen or add a normal keyboard. And keep it really inexpensive. That’s a device people will want.

The sub notebooks can get bigger and more useful without sacrificing cost, which is great for emerging markets and students. Tiny notebooks that perform well will be higher cost, and there’s a market for those, too.

Update: There has been a fair amount of criticism of this post. Instead of doing a follow up, I’m copying a comment I left at one blog post that says I didn’t research properly:

I should have been clearer in my post for those people, like you, who really know the space. I’ve tested a ton of these, and I have definitely done my research.. They litter my office. A lot of them are older 7 inch models. I have a Nano device that I guess hasn’t hit the market yet, running vista. not so well. I’ve got one of the Dells. I’ve tested 10 inch, 8.9 inch and 7 inch machines on every OS they offer (XP, Vista, Linux). I’ve even scraped machines and put my own stripped down version of linux with a browser…

and that’s when things start humming. The screen still sucks, and the keyboard still sucks, but the machine works well. as in as well as a desktop, at browsing the internet.