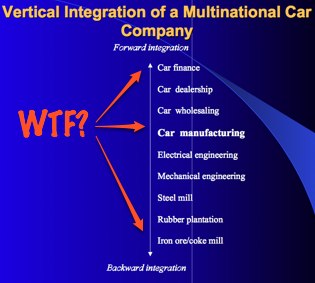 There’s always the “be more like Apple” advice that’s been going around for a couple of years. Make the iPod of cars. One that people love so much that they’ll pay a premium for it. Robert Scoble handed out pounds of this kind of advice a couple of weeks ago.

But there’s a reason why the car companies can’t build the iPod of cars. It’s because they’re so weighed down with all the logistical nightmares of actually building the stuff that goes into those cars.

Apple doesn’t actually make any of the parts that go in the iPod or iPhone. Factories, mostly in Shenzhen, China, do that. Most of the big PC manufacturers don’t actually build computers or any of the parts that are in them. Every part is made by different companies that specialize in building that particular thing. Even final hardware assembly is outsourced. Dell and some others do some final assembly themselves to allow for easy customization, but they are quickly getting out of that business, too.

If the car companies want to be more like Apple, they need to stop building any actual cars.

Vertical integration kills real research, because every company is doing their own work. With personal computers, every component has a vibrant and competitive market that drives innovation, quality and cost control. The big PC brands just design the final product and outsource the actual building of it.

Every major car manufacturer designs their own engines and drivetrains, manufacturers many of the important parts of the car, assembles it, manages a network of dealers and own their own finance companies to help people pay for those cars. Over the years they’ve dabbled in outsourcing, but the current trend is actually more vertical integration, not less.

Who’s the Intel of engine manufacturers? Why isn’t there one?

The best way forward for the automotive industry is to rip itself apart and start doing things sensibly, like the PC industry does. It won’t make any one company more stable, of course. In fact, it means competition will regularly drive companies at every point in the process out of business. But none of those companies will be in a position to drive our economy south if they do go out of business. Someone better will just take their place.

Does this mean our cars will be built in China? Yeah, it does. There’s no avoiding that. U.S. workers are just paid too much to build cars any more. Detroit may become the center of the car design world, with highly skilled and highly paid workers designing the iPod of cars, but the parts will be built elsewhere, and assembled elsewhere.

There’s a counter argument, that Toyota is the most vertically integrated car company in the world, and also the largest and healthiest. I argue that they’re the only ones that can do it profitably over the medium run in such an inefficient market because they have scale. If the market changes, which it is, that vertical integration model will fail.

And here’s the thing – this kind of change could never happen quickly in a normal market. There are just too many people negatively affected to make it work. But right now, with the auto-makers on the edge of collapse anyway, all we have to do is nothing to make this happen. Let the big car companies fail. Don’t bail them out. Their assets will efficiently move to the highest value use. There’s a good chance that ten years from now we’ll have a whole new crop of U.S. auto companies designing (and overseeing the assembly of) some really awesome cars.