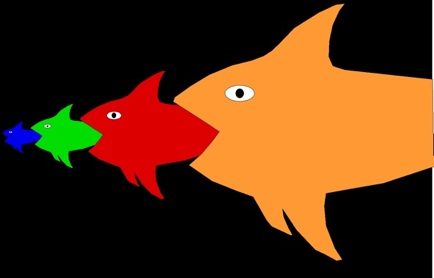 If Twitter wants to make money, it needs to do to others what they’ve been trying to do to Twitter . That is, extend its lead in market share by solving the problem of cross-platform micromessaging. With activity streams from Facebook, Microsoft, MySpace, FriendFeed, and a score of smaller players flowing over RSS, XMPP, and HTTP Push, Twitter can consolidate its power by cloning the best of its competitors’ offerings.

Key to this jujitsu is the understanding of what constitutes a micromessage. Though Twitter’s competitors for the most part frame the issue as one of interoperability, in fact Twitter is in the unique position to define the platform on its own terms. If Twitter provides tools that allow users to integrate their messages, social graph, and discovery mechanisms with all other systems, Twitter in effect becomes the Post Office of the new messaging paradigm.

FriendFeed has done an exceptional job in the last few months modeling this strategy, and soon will reach a tipping point where it will be worth assembling a near replica of the high value parts of a Twitter Follow and discovery cloud. Already you can use the Imaginary Friends functionality to aggregate “friends” from multiple services, and create a Friends List and associated realtime feed to simulate much of the Twitter UI. But Twitter’s embargo of realtime Track data keeps other services from exploiting the Twitter user base as an organic messaging cloud akin to Google’s search cloud.

However, if you turn this defensive strategy around and make Twitter the hub for not just the cloud it controls but all such messages, the resultant business value begins to mirror that of Google’s opportunity. Where Adsense exploits Google’s search portal as leverage across the Web, Twitter can syndicate its dominant realtime results across its competitors’ services. TrackRank becomes a much more efficient value proposition, harnessing as it does not only behavior but social swarming characteristics.

For Twitter to atomize its service into an open architecture is a leap the company’s executives and investors may not have the stomach to attempt, but they don’t have to look far for an example to guide them. Microsoft, with far more baggage as well as corporate culture working against opening its architecture, has made just such specific commitments with Mesh and the Live Platform with Mac and Linux clients, a sync protocol built on top of open standards, and Azure’s pervasive support for REST.

As much as the media wants to look at Twitter et al as a consumer service likely monetized via advertising, the value to companies internally as a vehicle for managing one-to-many collaboration relationships may prove far more important. Executives can manage by starting fires and watching to see who puts them out. Managers can convert internal messages first for business partner and eventually public consumption.

By defining the interchange points for micromessaging intercommunications, Twitter can use its market muscle to stay ahead of attempts to clone it from below or above, and at the same time stay ahead of attempts to pick off enterprise applications of its model. And most disruptively of all, Twitter can turn its competitors into user acquisition and business process development partners. But wait too long and the moment will pass. Can Twitter afford to miss a fail-whale of an opportunity?