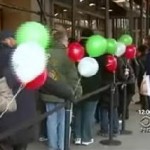 According to a Reuters report, there was 200+ CrackBerry addicts waiting this morning at the mid-town Manhattan Verizon store for the BlackBerry Storm and most of them were turned away due to supply levels. The report then states,

The angry customers caused a ruckus and police came to restore order.

Really? The police had to be called to calm down middle-aged suits? What’s wrong with these poeple. Plus, did anyone read all the crappy reviews?

We ran a poll here on the site and 44% stated that they had purchasing plans for the Storm, but a 200 person line is iPhone-impressive. Even though Verizon ran out of the Storm, they still took peoples money and promised a next day Fedex delivery.

Anyone snag a pic or have first hand accounts of this situation? Send ’em to us: tips AT crunchgear DOT com