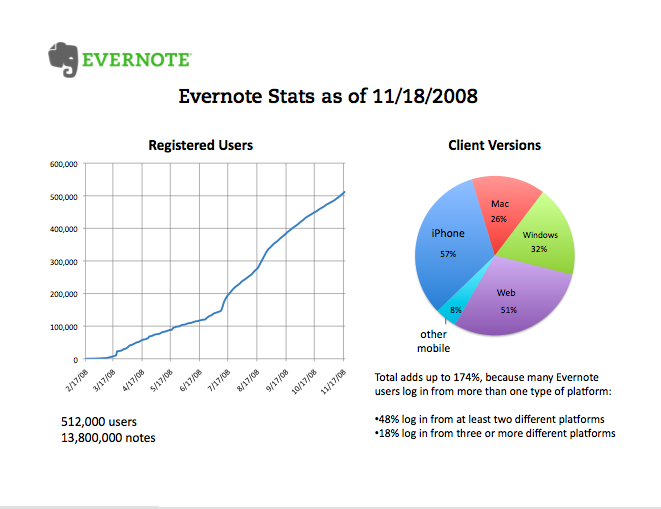 Some apps wander around the wilderness for a while until they can find the perfect home. For Evernote, that home is the iPhone. The note-taking, picture-capturing, voice-recording, handwriting-recognizing universal memory service has been under development for years and launched last February in private beta on the PC. But it wasn’t until May 29 that it debuted on the iTunes store as an iPhone app. That’s when it started to take off.

Now Evernote has 512,000 registered users, who have created 13.8 million notes. In addition to the iPhone app, Evernote offers its service thorugh a PC client, a Mac client, a Website, and other mobile devices. The iPhone app is the most popular, being used 57% of the time. It is followed by the Web (51%), the PC client (32%), the Mac (28%), and other mobile clients bring up the rear (8%). These numbers add up to more than 100 because nearly half of all users access the service via more than one app.

The PC and Mac clients are the most fully-featured, yet it is the iPhone app that gave Evernote its critical mass. Perhaps that’s because the iPhone app lets you take pictures using the camera, append a note and save it to your Evernote page, where it is archived and searchable. It is more difficult to capture memories with a laptop.