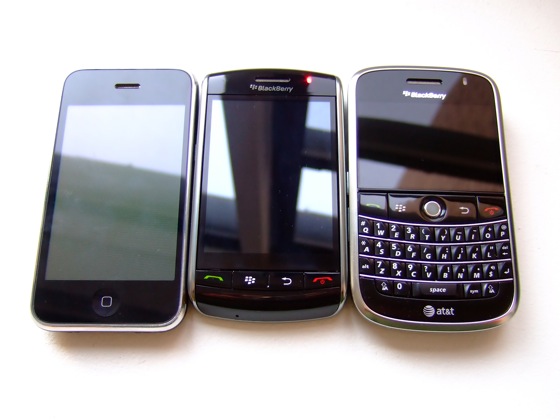 The ‘iPhone killer’ label (which I hate using – BTW) has been thrown around since the first touch-screen device hit the market after the original iPhone was launched last year. Unfortunately, nothing has been able to live up to the hype. Both consumers (you) and techies (us) have been eagerly awaiting the launch of the Storm in the hopes that it would knock the iPhone down a peg, or even level the playing field. I don’t want to dash your dreams, but the Storm is not on par with the iPhone. It is, however, the closest device available on the market today to compete with the iPhone. But that’s not saying much. Imagine the iPhone being on top of a mountain with the rest of the touch-screen devices at base camp. The Storm sits atop all the rest, but it’s still at base camp.

Video after the jump.

It’s a BlackBerry through and through so there are no problems here. You can swipe through e-mails by going left to right and vice versa, but swiping from right to left on the last e-mail will put you back at your inbox.

It’s not the most intuitive feature jumping from a standard QWERTY BlackBerry, but the iPhone doesn’t have it, so that’s saying something. However, it doesn’t always register my tap or click in the right spot, which is extremely frustrating. The point is that, I don’t want to take an extra 10 seconds or more to tap/click the sweet spot to select exactly what I want. It works great on my Curve and Bold and takes far less time. But, again, the Storm has it and the iPhone does not. Take it however you want.

I had zero issues with the Storm’s browser. Zooming in and out is simple and it seems to load most pages fine, except the NYTs as it reverts to the mobile edition and doesn’t want to load the regular site. Anything with a lot of Javascript chorks, though. Everywhere else on the device there are scroll up/scroll down keys but they’re missing on the browser. Seems like an odd move, but the navigation bar would be a bit crowded.

It has a flash and auto focus, and it takes video. It even zooms in and out by swiping from corner to the center or vice versa. Picture quality is very good and certainly beats out the iPhone. It takes a very long time to focus and capture an image (slower than the iPhone). I believe it’s best suited for still photography.

The interface is very similar to that of the iPhone and works just fine.

I wasn’t able to test all video formats, so I apologize for that in advance, but the Storm was able to handle all the formats (mostly MP4s) that I threw onto it. The default music player is nothing fancy, but it plays music and that’s all I need it to do. Because of the screen’s size, pictures look crisp and sharp and you can swipe across the screen to get from one picture to another.

Seemed fine to me and those on the other end said I came across crystal clear. Voice dialing was peppy and fairly accurate.

I like the way RIM handled the touch-screen because it’s different than what every other manufacturer has done, but I’m not the biggest fan of the clickable screen. It’s a BlackBerry, first and foremost, and it’s meant to knock out e-mails, texts, and IMs and I just can’t do those things as efficiently as I would on a standard BlackBerry. When you pull up any one of the three keyboards, you lose half the screen. Yes, the iPhone falls into that trap as well, but I’m also making a direct comparison to other BlackBerrys here. I don’t want to lose that big beautiful screen just because I need to type something.

Because of the nature of the screen I worry that all the dust and dirt will affect its performance in the long run by burrowing into the sides.

The accelerometer is spastic on the Storm. It reorientates itself far too often. I ran into some issues when taking the Storm out of my pocket and unlocking it when it was still in landscape mode where it remained for some time. It’s best to let the Storm get back into portrait mode before unlocking.

I think it’s safe to say that BlackBerry users rely on shortcuts and the Storm obviously fails in this department. By pressing down on the Home key you’re presented with the active apps menu (alt-back button on all other BlackBerrys), but it simply doesn’t get the job done.

The lack of physical keys also takes away the ability to soft and hard reset the Storm. Are we supposed to take the battery out every time we want to reset the device?

RIM, please stop worrying about the hardware and speed up the OS updates. Yes, it’s always stable when released, but I don’t like waiting years and years for you to update the software (HTML e-mail, anyone?). You can’t take a nap in this department anymore with Apple and Android becoming major players.

I love BlackBerrys and will finally admit that the iPhone is not stupid. I refuse to give up one for another, so I carry around both devices. I wish the Storm were the real iPhone killer, but it’s not and I’m afraid there won’t be anything to ‘kill’ it for a while. So, let’s all just move on until someone makes some decent hardware for Android — but that’s neither here nor there. If you can get used to the click screen and I’m sure you will (and so will I, but I’ve only had it for 36 hours thus far) then the Storm combines what’s great about RIM and their products and does a decent job of bringing in the touch-screen aspect. I won’t be ditching my Bold or iPhone 3G for the Storm, but if you’ve been waiting for it then I strongly encourage you to go to your local Verizon Wireless store and spend some time with it. I don’t think you hardcore BlackBerry users will like it, especially if you’re used to shortcuts and hot keys and hammering out text, but if you’re a casual user looking for a touch-screen device (which is the market RIM seems to be going after here) then go for it.

If there’s something specific you’d like me to take a look at, then please drop your questions in the comments section and I’ll do my best to answer them.