For all their mesmerizing graphics and adrenaline fueled gameplay, it might come as a surprise to non-gamers that many of today’s most popular computer games are bogged down by downtime (I should know – I spent the better part of 1999 mining virtual ore in Ultima Online to become a master blacksmith, and enjoyed about 10 minutes of it). MMOs like World of Warcraft see epic battles punctuated by hours of wandering mostly empty wilderness, while FPS games often punish gamers for dying by making them sit out and watch their comrades go at it until the beginning of the next round.

Today GotGame is giving these gamers something to do during these bouts of boredom. The company has released Rogue, a web browser based on WebKit and Adobe’s AIR platform that integrates directly into most of today’s popular gamer, allowing users to swap between their game and the web with a single hotkey. Gamers will be able to check their Email, listen to Pandora, watch Hulu videos, or casually browse the web at their leisure, jumping back into the game within seconds whenever they need to (the browser supports opacity, so it’s easy to tell when you need to swap your attention).

It’s possible to accomplish similar multitasking by placing games in ‘Windowed’ mode (which doesn’t make them take up the full screen), but this makes games prone to crashing and poor performance. Conversely GotGame says that Rogue should run perfectly fine with most games, and should only slightly affect performance (though the effect will increase significantly if you watch Flash-based movies like Hulu).

While it may seem counterintuitive to non-gamers, GotGame Rogue is a great idea – I would have loved to have had it during my gaming years (instead I was forced to sit a TV next to my computer monitor). Provided the app is as stable as GotGame claims, it will probably do very well. Other players in this space include Xfire, which offers an in-game application for socializing with other gamers. 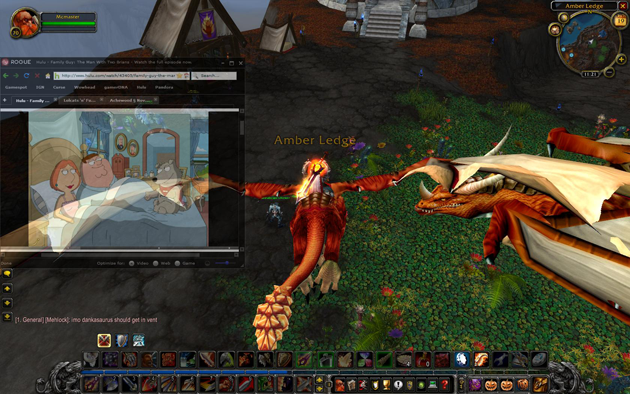