Today, the (for-now) non-profit Mozilla Foundation released its financial statements for 2007 (embedded below). Revenues for the organization behind the open-source Firefox browser were up 12 percent to $75 million, with search-related royalties from Google accounting for 88 percent of the total, or $66 million. (Another $2 million or so came from other search engines). Those revenues come from Mozilla’s portion of the search advertising revenues generated by the default Google search box in the Firefox browser.

Google’s overall percentage of Mozilla’s revenues is even bigger than it was in 2006, when it accounted for 85 percent. And that proportion may continue to grow over the next three years, as Google just extended its contract with Mozilla.

But buried in the financial statements is the fact that the Mozilla Foundation is being audited by the IRS and its non-profit status is in question:

On the audit of the Foundation there has not been any formal notification of issues. There has been inquiry regarding its tax exemption. Management believes that it is conducting its operations in accordance with its original application for exemption and for which it received the advance ruling as a public benefit corporation.

Mozilla argues that the search dollars should be treated as royalties, and thus not count as revenues under the tax code. There is little precedent for a non-profit generating so much of its “support” from what is, in effect, a commercial agreement. If the IRS rules against it, the Mozilla Foundation would lose its tax-exempt status. It would then be classified as a private foundation and have to pay an estimated $100,000 in excise tax for 2007 alone.

That’s peanuts, and wouldn’t change much at Mozilla—except for the fact that it is pretending to be a non-profit foundation when everyone knows it is a charitable arm of Google. What we still don’t know is how Google accounts for the $66 million it paid to Mozilla last year. Was it a charitable contribution, or lumped in with its regular traffic acquisition costs?

And here’s another conundrum: Why does it take the Mozilla Foundation more than year to issue its financial statements from 2007? After all, it is almost 2009. 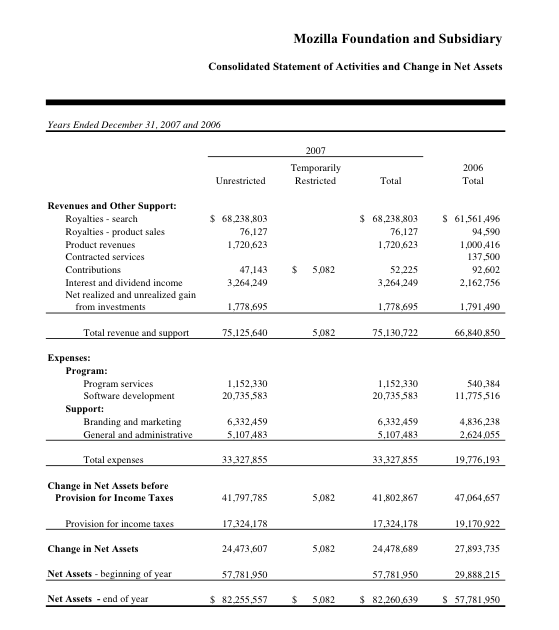 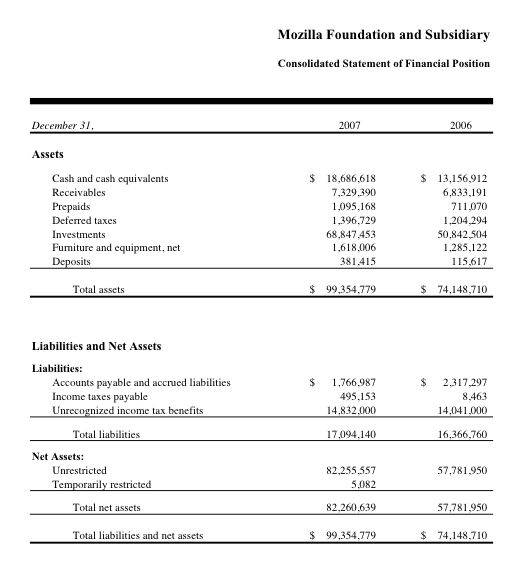