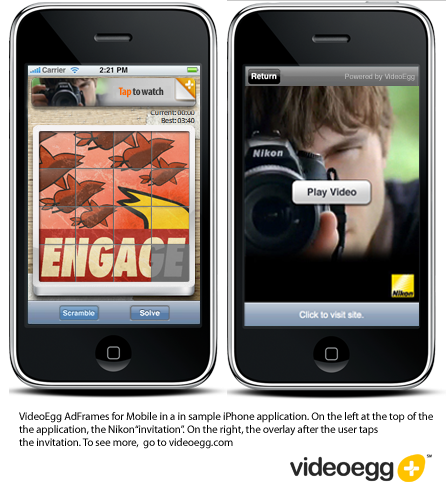 Those free iPhone apps will soon be filled with ads. VideoEgg is the latest ad network to extend its ads to the iPhone. The company is known for its video and social-app ads that entice people to click on them to open up a Flash window filled with videos, maps, or apps that let consumers learn more about a brand. VideoEgg only charges if a consumer engages with the ad.

It is taking the same approach with the iPhone, offering ads that can appear as a small banner at the top of the screen for any given app. When you click on the ad, a video could play or something that looks like a mini Webpage could pop up with more information about the brand. Why switch to mobile now? VideoEgg’s chief marketing officer Troy Young tells me:

The reason we are interested in it now is because it is becoming a media consumption platform. The things people are doing on the iPhone are more like media consumption so we think that we can get people to spend time with brands.

VideoEgg’s ads on the Web are seen more than one billion times a month by 80 million people, says Young. He says the “engagement rate” (how often someone interacts with an ad) on the Web is a little more than one percent. But so far in beta testing, the engagement rates on the same ads on the iPhone have been between 2 to 3 percent. These rates will no doubt come down as iPhone ad impressions scale up and they no longer seem like such a novelty, but even if they remain at par with the Web that would be a victory.

Mobile ads tend to perform extremely poorly, except for on the iPhone. Mobile ad network AdMob has seen similar success on the iPhone.

When I bring up AdMob, Young says derisively that the iPhone “saved them” and characterizes their ads as mostly direct response, not the high-falutin “brand engagement” ads that VideoEgg serves up. Direct response ads, like search ads, tend to do better, but never mind. Young seems to think that “direct response ads are going to have a hard time.” I don’t really see the difference. AdMob could serve up brand ads just as easily as direct response ads. And their ads work pretty much the same way. You click on them and they open up to a bigger window. It’s really not that big a deal.

The real difference between AdMob and VideoEgg is that VideoEgg won’t sell iPhone ads by themselves. For any given campaign, it will place 5 to 10 percent of the ads on the iPhone for advertisers who want to go mobile. VideoEgg will charge the same for mobile ads as it does for Web ads, at least until the numbers prove what they are really worth.