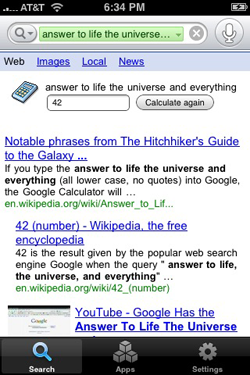 Google’s search-by-voice application is finally available on the App Store. To grab it, visit this link (the page still shows the old version, but you’ll download the new one). The application was originally announced on Friday, leading to widespread excitement that quickly turned to unrest as the application failed to make its debut on the App Store. The delay led to criticism of Apple’s App Store approval process, which apparently leaves all developers in the dark – even Google.

The app allows users to speak into their iPhones to submit queries to Google’s search engine, which can serve up both standard search results as well as movie showtimes, addresses, and other handy information. Voice detection seems to work pretty well, though it sometimes takes a few tries with long phrases and names (I was able to correctly search for the “answer to life, the universe, and everything” after only two tries). And when it works, it’s really cool – I’ll probably be using it on a daily basis.

My biggest issue with the app is that there is apparently no way to use the voice detection feature to call a contact, despite the fact that you can search through contacts using manual text entry. One of my biggest gripes about the iPhone is that there’s no way to make a hands-free call, and while this would still require at least one buttonpress, it would be an improvement. A free application called Say Who offers voice dialing on the iPhone, but it would have been nice to see the functionality integrated into the Google app.