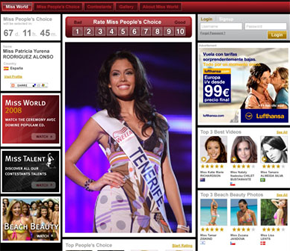 Miss World is going digital. While many American readers may not be familiar with the competition (it isn’t the one owned by Donald Trump – that’s Miss Universe), Miss World is one of the world’s most popular televised events, and has a huge international audience. This year the competition has partnered with Amuso, a New York based media platform that specializes in contests, to bring the popularity of Miss World to the web. The competition’s portal at MissWorld.com will now offer a social network centered around the Miss World competitors, allowing users to send them messages, view photos, read about their interests, and vote on their favorite candidate.

When the competition’s finale airs this December, these votes will be tallied to determine the winner of the People’s Choice, automatically placing the candidate in the final pool of 7 nominees for the top prize. The site will also offer content from the month-long Miss World Festival leading up to the event in Johannesburg, South Africa. To help distribute the content, Amuso has partnered with portals around the world, including AOL, which will promote Miss World on AOL UK, France, and Germany, as well as on its social network Bebo.

Besides running the Miss World portal, Amuso’s primary product is a platform for online contests, allowing users to create their own versions of American Idol, Next Top Model, or whatever else they can think of, each with cash prizes. To participate in a contest, users are charged one dollar for each photograph or video submitted (the type of file depends on the contest – a beauty pageant may ask for images, while a singing contest would ask for video footage). The Amuso platform allows the contest administrator to control how voting proceeds (for example, photos can be paired off as voters choose which one they like better, or they can be presented individually with a 10 point scale). The Amuso video player also includes integrated thumbs up/down voting. 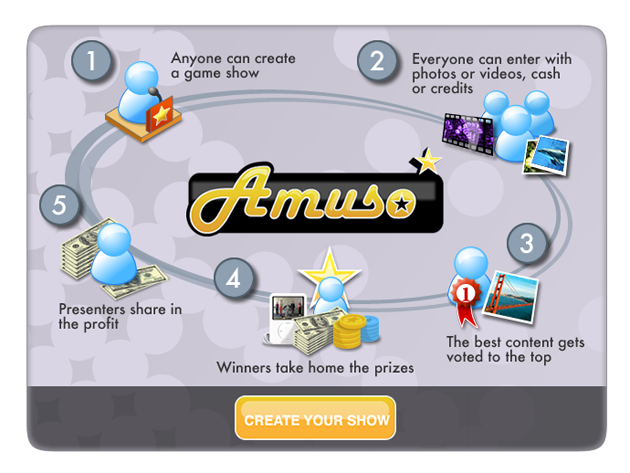 At the conclusion of the competition, the winner receives 50% of the proceeds, while the contest’s original creator gets 15% and Amuso takes 25%, along with 10% for transaction fees. If a charity conducts a competition, all of these fees are waived.

While Amuso seems to be tackling two very different spaces – catering to both large, established competitions and smaller user-created contests – it seems to be doing well on both fronts. By charging $1 per submission it is effectively monetizing user-generated content, while simultaneously ensuring the quality of its competitions (spammers are much less likely to ruin this kind of competition if they have to pay). And while much of Miss World’s audience may come from countries that are harder to monetize, the upcoming pageant is likely to drive a significant number of new users to Amuso’s platform.