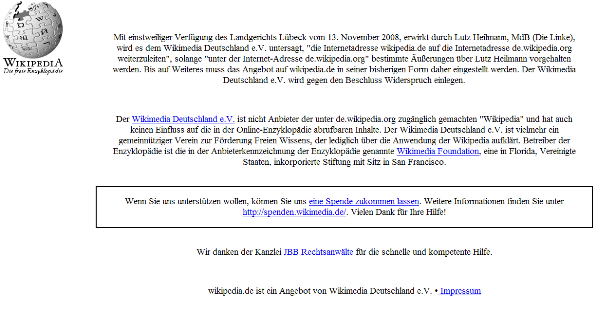 This is the image that comes up when people try to access Wikipedia.de, which used to be forwarded to Wikipedia .org. It reads:

The county court of Luebeck (North Germany) has issued an order in the name of Lutz Heilmann, Member of Parliament (left party/post-communist) that the German Wikipedia (Wikimedia e.V.) must not allow linking its domain wikipedia.de to the Web site wikipedia.org, as long as the German language version of wikipedia.org makes certain statements.

Update: looks like Heilmann came to his senses. In a statement (translation), he says he’s sorry for the legal action that was taken and that the autoforward of wikipedia.de will soon function again. 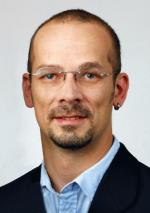 According to OhMyNews, these statements include Heilmann’s past as a member of the Stasi – the former official secret police of East Germany – as well as allegations that he has threatened an ex-boyfriend.

An earlier report from Focus Online (article in German) says Heilmann objected to claims that he had interrupted his studies at university, and that he had participated in a business venture involving pornography.

Heilmann also took legal action against three Wikipedia users who had worked on the article.

Of course, ordering a court to take such extreme measures only draws more attention to the entry, which is still available both in English and German since the Wikipedia servers are hosted in Florida under United States law.

The entry for Lutz Heilmann is currently ranked number 1 on wikirage‘s list of Wikipedia entries that are receiving the most edits per unique editor over various periods of time.