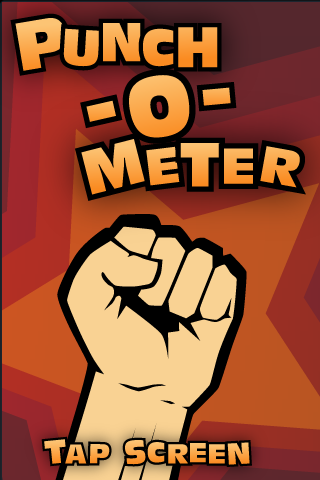 Today, I downloaded one of the dumbest, yet somehow most satisfying, apps to my Android phone. It is called the Punch-O-Meter. You grasp the phone (firmly) in your hand, tap the screen, and then give it your best shot. The app uses the phone’s accelerometer to measure how fast you can punch. After each punch, you get a score and a one-to-five-star rating. It is guaranteed to destroy your phone.

When you start playing with it in a room full of people, everybody wants to try it. Especially anyone under five. When my two-year-old son insisted that I let him try it after he saw how much fun his older brother and I were having competing to get the highest score, I knew I would have to uninstall it quickly or else risk seeing the phone smashed against the floor.

A similar app with the exact same name is also available on the iPhone for 99 cents. (The Android app is free). The iPhone version is made by DoApp, and appears to be unrelated to the Android Punch-O-Meter. It looks a little different (you can see a video here), and the developer of the Android app, Alex Pisarev, is not listed as a member of the DoApp team.