First we had Twitter. Then we had Yammer (and Identi.ca and Present.ly). Now we have Twingr. You can create your own version of Twitter for any group you like, and Twingr will host it. The service, created by Killer Startups (which recently bought Startups.com and is expanding beyond blogging), just launched in private alpha and is open to the first 500 micro-blogging communities that get on it.

Like Twitter, you can send out 140-character messages, follow what other people in your Twingr group are saying, and send direct messages to them as well. A nice added touch is a box where you can paste links without taking up any of your allotted characters. No need to fool around with TinyURLs (Twitter, take note). Here is a TechCrunch Twingr that I just set up.

You can think of Twingr as the Ning of micro-blogging sites. The idea is that there will be hundreds of Twingrs (eventually more), all organized around their own particular communities. In this sense, Twingr is very much like Yammer, the TechCrunch50 winner that created an enterprise version of Twitter. In fact, Twingr looks almost exactly like Yammer, down to the royal blue background. The difference is that Yammer is a private messaging service limited to people in your company, whereas anyone can see and join your Twingr group.

To be honest, I’d just rather wait until Twitter launches its own version of groups, as it already has in Japan. I’ve already put so much effort into building up my network there, and it is programmed into my phone for easy SMS Tweets. Until then, there’s Twingr.

Update: Turns out it’s a great day to launch a Twitter competitor because Twitter is once again down.

Update 2 (11/14): During the first 20 hours after its launch, 1,000 Twingr communities were created. The private alpha is now closed 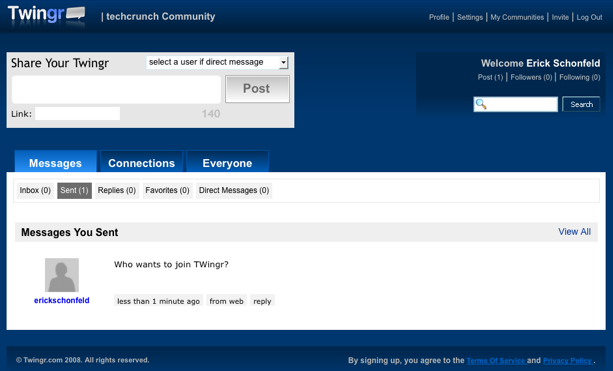