Craigslist is great (I use it all the time), but there are few things more unnerving than inviting a total stranger billing himself as a “HANDY MAN, AT YOUR SERVICE!” to your house to make a few repairs. The vast majority of transactions on the site go smoothly and without incident, but there’s a reason Cragislist advises you to meet up in a public place and let a friend know what you’re doing, just in case. And even if the guy you hired isn’t a creep, there’s still a chance he won’t be any good at his job.

Workstir is looking to take some of the guesswork out of hiring for services like home repair, cleaning, and child care. The site, which we’ve described as a Craigslist/Yelp hybrid, allows you to post service requests to a forum frequented by these service providers, much as you would in the Craigslist ‘Looking for’ section. These service providers then contact you through Email. But instead of making you verify their credentials independently, each service provider will have a Workstir profile that features photos, their interests, and reviews from other Workstir users who have dealt with them in the past. 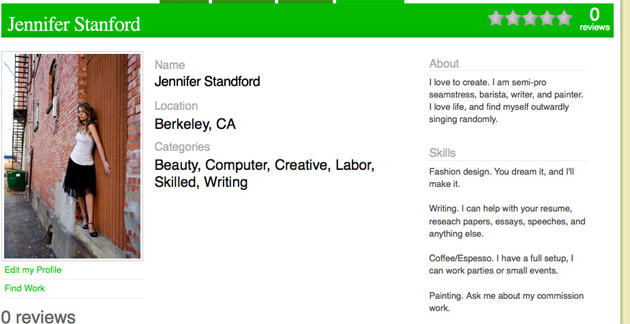 Service providers also benefit from this setup, as they’ll be able to view a daily digest of available jobs in their area, and can also elect to receive mobile alerts so that they can be among the first to respond to a request. And as the best service providers build up their ratings, they can potentially charge more than their less-able competitors.

The site will face competition from Angie’s List, which offers local service reviews for a fee, but its biggest obstacle will lie in establishing a large enough user base (both from customers and service providers) to make its reviews credible and worthwhile. That said, there’s definitely a market for trustworthy classifieds, so Workstir may have no trouble finding an audience.