Transpera will later today announce it has secured a second round of funding to the tune of $8.25 million on top of an undisclosed amount in Series A financing it received in July 2007.

The capital injection comes from initial investors Flybridge Capital Partners (formerly IDG Ventures), Intel Capital and First Round Capital, who also brought in Labrador Ventures for this second round. The round also includes some debt financing from Silicon Valley Bank, a member company of SVB Financial Group.

Transpera has developed a platform that enables the distribution and monetization of Web videos on mobile phones. With the so-called Transpera Ad Platform (TAP), the company offers mobile video publishers and carriers a suite of promotional and distribution building tools to enhance the end user experience, and advertisers a way to market their wares by serving targeted ads in the form of interactive display banners, pre-roll videos, overlay ads, post-roll experiences and mini sites. There’s even a spin-off platform tailored specifically to the iPhone (screenshot of the model below), which makes sense given the fact that web browsing and entertainment is quite popular on the device.

The platform is in use by a number of noteworthy information and entertainment brands, including Associated Press, CBS News, Discovery Communications, Fox Reality Channel, MTV Networks, Break.com and Revision3 (sample video).

Transpera relies on a very experienced team (nice touch with the animated pics, guys) and an impressive advisory board that includes people like Tom Rogers (CEO TiVo), Todd Warner (Corporate Vice President, Microsoft Windows Mobile) and former President of ZD Interactive Media Division Jeff Ballowe. They also managed to snatch Brian Monnin, who will be joining as Chief Product Officer, away from his executive position at Brightcove. 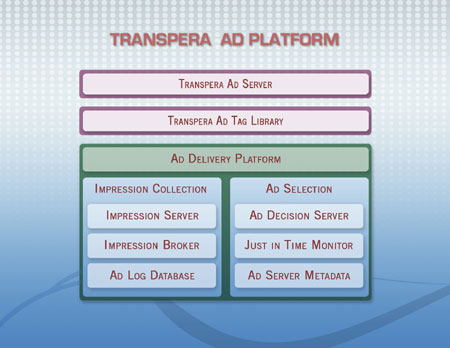 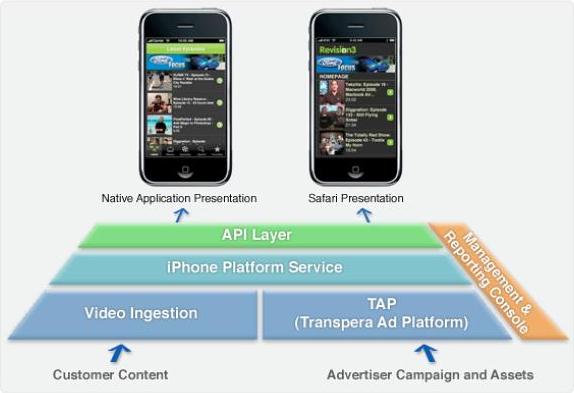