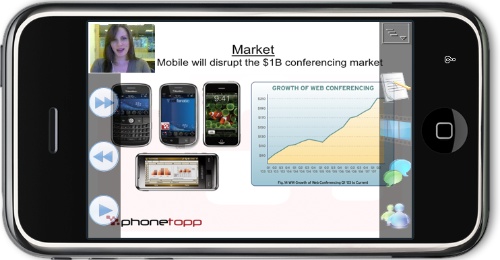 It’s 8 am, and you’ve got a WebEx meeting at 8:30. Unfortunately, the kids need to be at school by 8:15, and it’s a 40 minute roundtrip to drop them off. Your options? Either you’re going to be hopping from coffee shop to coffee shop looking for parking lot WiFi, or the kids are playing hooky through first period today. PhoneTopp, a startup out of San Jose, California, has a new option, which they’re announcing at today’s Under the Radar conference: attending web conferences on your smartphone.

In a recent survey of over 15,000 web conference regulars, PhoneTopp found that over 62% of respondents wanted to be able to participate in a web conference through their smartphone. Unfortunately, current desktop conferencing solutions were a bit too bulky and processor intensive to be ported to run on the significantly less powerful hardware available in smartphone handsets, so Phonetopp took a different approach: cloud computing.

By passing web conference data through Amazon’s EC2 servers, PhoneTopp was able remove much of the rendering legwork from the handset and significantly lower bandwidth requirements. They’ve also modularized each element of the conference, freeing up screen real estate and further optimizing bandwidth – not paying attention to chat? Hide the chat pane, and that data won’t be sent until it’s required. With these optimizations in place, PhoneTopp’s able to send web conference data over 3G with a latency of right around 5 seconds.

Being that they built the solution from the ground up, they’re also able to add a few features unique to their offering. Amongst these is something they call “mobile rewind”. Miss a slide? PhoneTapp stores past slides, so you can peruse them at your liking without holding up the entire meeting.

Though they’re announcing the product today, PhoneTopp is going to spend another month or so polishing up their service before letting anyone poke and prod at it. After seeing a demo of the product, I can say that the whole thing seems dead simple: Answer a phone call, launch the application, and you’re in. Want to see for yourself? Head to PhoneTopp.com and sign up for their beta – private beta begins in December, and early adopters get 3 months of the $8 per month service for free. Public beta will begin sometime in the first quarter of next year.

PhoneTopp will support Microsoft Live Meeting and Webex conferences during the beta periods, with support for Adobe and Citrix conferencing on the way. Device-wise, they plan on supporting the iPhone, Windows Mobile, and BlackBerry devices.