It seems that the tide of the App Store is finally starting to shift, as more developers look to tap into the iPhone’s online connectivity in an effort to separate their apps from competitors’. The latest app preparing to join the fray is Quick Draw, a Pictionary-like game that allows iPhone users to play eachother online using the phone’s WiFi or cellular networks. The app is similar to iSketch and XSketch (covered here), throwing a handful of players into a room and choosing one of them as the ‘drawer’ while the rest frantically try to guess a keyword. And if Quick Draw is half as addicting as those sites, it likely has a hit on its hands. The app is currently in beta testing, with plans to appear on the App Store within the next two weeks. 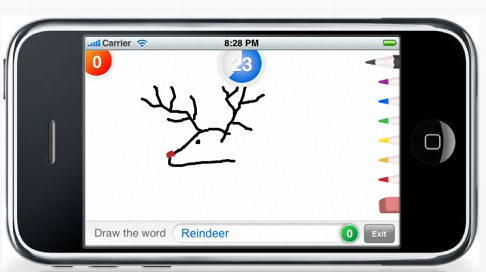 Last week we took a look at a pair of other iPhone applications that are leveraging the iPhone’s network effect to get a leg up on competitors: Chess With Friends is an asynchronous chess game looking to capture the addictiveness of Facebook’s mega-hit Scrabulous, and Smule’s Ocarina allows users to listen to music being played live around the world.

Here’s an unofficial video of QuickDraw in action (it was put together by one of the beta testers):