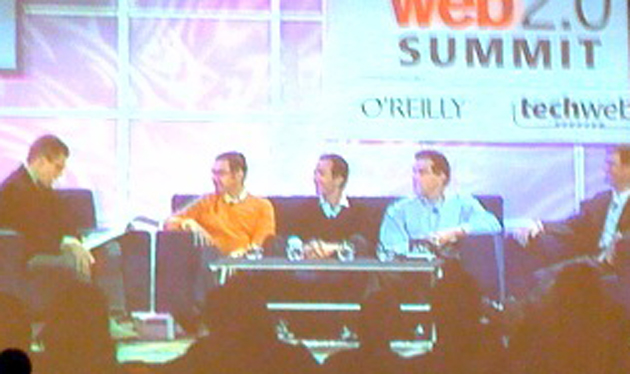 The panel began with a general debate on exactly what a platform is, and how each of the companies play in the space. Kapur says a platform has to create an ecosystem that includes a core base of users, tools to build applications, and an advertising network to monetize the platform. Kapur also let’s something slip – saying that MySpace will soon release a payments platform and a virtual goods platform.

Schrage says the Facebook platform is a place for users to interact, and for developers to take advantage of that social utility.

Treadwell, from Microsoft, is talking about open standards and advanced tools that let developers easily create applications. He highlights the iPhone platform as a great example.

Levchin says that everyone is talking about openness, but in reality every one of the platforms represented on stage are closed to some degree.

Gundotra says you have to disambiguate the term. Schrage focuses on the results – that developers can get far more traffic and engagement on Facebook than they can on their independent web applications.

Kapur says the most important thing is to build developer trust by having clear rules and guidelines – a clear slap at Facebook and their constantly evolving policies that tend to anger developers. Levchin (who runs one of the companies that has been in the middle of the Facebook politics) agrees, and notes that Microsoft’s Windows platform has done a good job over the years with consistency and backwards compatibility.

Schrage weighs in on Facebook’s behalf and distinguishes between technical and policy issues. He says on policy its important to be transparent and tell developers what’s coming. He says Facebook has sometimes failed to communicate changes to their platform and it’s something they’re still working on. He says over 400,000 developers have signed up to Facebook Platform, and they’ve had to scramble to scale. He also highlights the importance of community, and creating opportunities for developers to work with each other.

Gundotra (Google) says Facebook and MySpace aren’t true platforms but are extensible applications, similar to Office in the Windows world. He says the web is the important platform that we are all developing for. Open Social, Gundotra says, is an attempt to focus on the web as the platform.

Schrage says open standards are great, but they take too long to emerge. Experimentation with proprietary formats in the meantime is the right thing to do, he says.

Gundotra says it’s a recipe for disaster to have a single company control the platform. Innovation slows to a release every five years (referring to Windows). Using the open web allows fast innovation, and no one controls the platform.

Gundotra says “It’s Windows v. the web. And the web has won.”