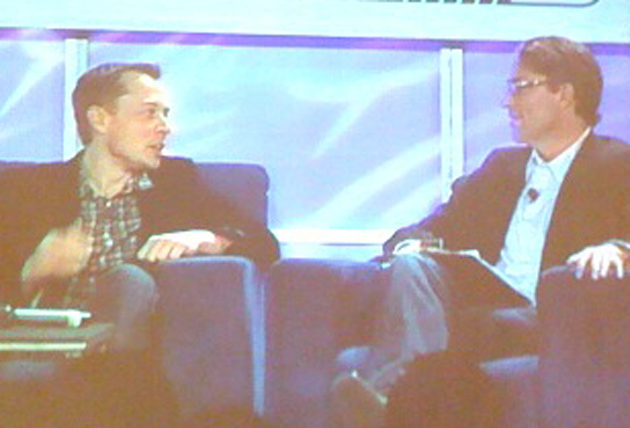 What do space flights and electric cars have to do with Web 2.0? Absolutely nothing. Still, there will be lots to talk about. In September SpaceX put a Falcon rocket into Earth orbit, the first privately developed launch vehicle to reach earth orbit from the ground. More recently, his Tesla Motors has gone through layoffs and raised another $40 million, and Musk took over the CEO role. There have also been some spectacular Tesla crashes.

Our live notes of the interview are below:

Musk says they’ll be making 1,500 Tesla Roadsters a year at full productions. He says it’s faster than a Ferrari – 3.9 seconds 0-60, and more efficient than a Prius – about 130 MPG equivalent. There are 1,200 people on the waiting list.

The next product Tesla will launch is a sedan, the Model S, which will be unveiled in Q1 2009. It will be half the price of the $109k roadster. The third model will be a car that’s less than $30k, and they’ll create “hundreds of thousands” of them per year.

Battelle ask Musk about the recent layoffs, the funding and the CEO change. Musk says the last time there was a successful auto startup was Jeep in 1941. Building a car company is hard, he says, but that we can’t leave electric cars up to Detroit, because we’d be waiting too long.

Musk says he spends very little time on Solar City, which provides solar panels to residential customers, and lets buyers get the panels with no down payments.

Musk says the Internet, energy and space exploration are the key areas of exploration for humanity. SpaceX is now six years old and he started it from scratch.