Now that the election is over there is going to be no shortage of punditry looking to pinpoint exactly what moments in the last 18 months contributed to Barack Obama’s victory over John McCain. No one is better equipped for this analysis than Auditude, the video fingerprinting company that was recently employed to power part of MySpace’s video platform.
Using a database chronicling millions of hours of video content, Auditude can identify the original source of video clips scattered across the web, even if they’re only a few seconds long. And with that, the company can figure out which speeches, gaffes, and ads actually mattered to The People.

For its initial analysis of the election, Auditude has mapped out the popularity of each moment in this year’s three presidential debates. Crawling across sites like YouTube, Veoh, MySpace, and Yahoo, the site isolated several thousand videos depicting portions of each debate, and then laid them out in a timeline to determine which moments were the most viewed.

Unsurprisingly, the majority of popular clips involved McCain gaffes and moments when Obama said something that was especially poignant. This bias can be attributed to Obama’s much stronger web presence, and a generally liberal bias on sites like Digg where videos tend to go ‘viral’ and garner millions of hits. That said, there’s still plenty of useful data to be found (for example, note that the infamous “that one” statement only had around half as many hits as McCain’s “Zero?” reaction in the third debate).

Below are charts for each debate, along with links to the highlighted clips: 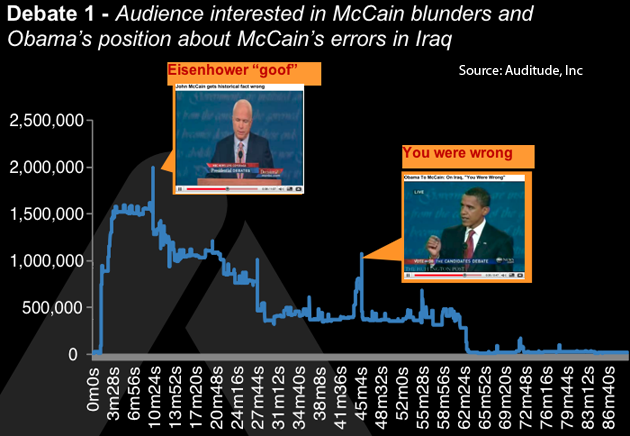 Clips:
Eisenhower ‘Goof’
You Were Wrong 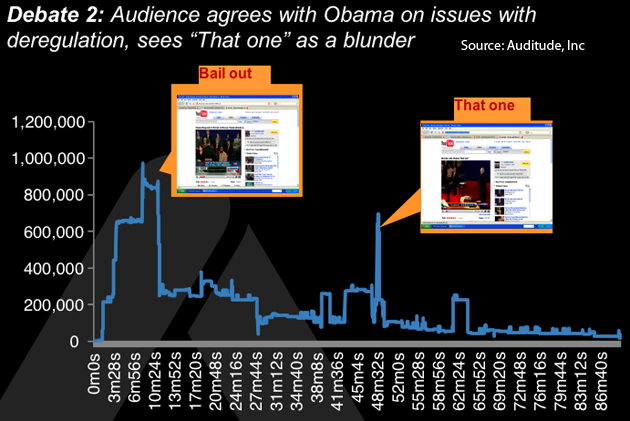 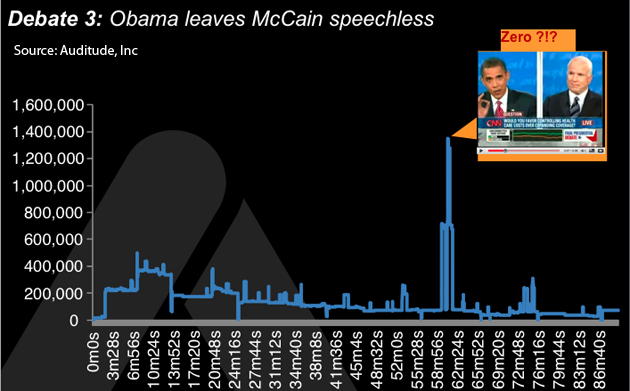