The U.S. Election isn’t until tomorrow, but doesn’t it already seem like Obama has won? That is certainly the impression you get if you look at any of the polls, state-by-state electoral maps, or prediction markets out there. Even the latest Fox News poll has Obama leading McCain by 50 percent to 43 percent.

My favorite prediction tool, and the one with the best record of getting elections right, is the Iowa Electronic Markets. In its winner-take-all market for the U.S. Presidential election, it is predicting that Obama has an 89 percent chance of winning the majority of votes (see graph above). NewsFutures, similarly puts Obama’s chances of winning at 90 percent, and Intrade has his stock trading at 90.6.

All the traditional telephone polls similarly show Obama in the lead, especially those that bother to call people on their cell phones. But you cannot really trust those polls. They are notoriously wrong. It is better to look at state-by-state breakdowns projected onto an electoral map. The New York Times, for instance, has Obama clearing at least 291 electoral votes to McCain’s 163 (he needs 270 to win): 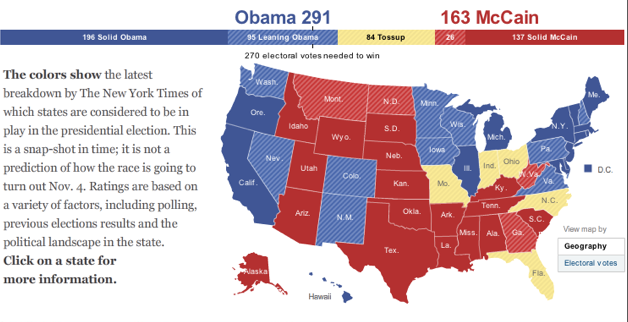 The NYT also has a nice interactive graph that shows all the major poll results and how they’ve changed over time. Again, I trust markets over polls any day, and it is interesting to note that in another Iowa Electronic market predicting the share of the vote each candidate will get, it is predicting a closer race than even Fox. Right now, it has Obama winning 53 percent of the vote compared to 47 percent for McCain.

Remember, those numbers can literally change overnight. And the only poll that counts is the one taken in the election booth.