Virtual goods have massive monetization potential, but many sites simply don’t have the resources to build a virtual goods engine or to produce assets that its users would be willing to pay money for. Boston startup Viximo, launched earlier this month, is looking to offer sites a turnkey solution.

The company has built an embeddable gift store and showcase that can be integrated into any site, and also features its own microtransaction system (you can use your own system if you’ve already got one in place). Viximo CEO Rob Frasca says that while the site’s all-in-one package and ease of use will be a big selling point, its most valuable (and difficult to replicate) feature is its large library of digital assets. For now Viximo is offering virtual gifts similar to Facebook’s popular gift store, but Frasca says that the platform supports puzzles, ringtones, or any other kind of virtual good.

Since its launch earlier this month, Viximo has formed partnerships with a number of Facebook applications, as well as stand alone websites looking to integrate their own stores. Launch partners include Always Athletes, which produces a Facebook app called My Sports Career; We’re Related, a Faecbook app with a reported 6.5 million active users; Birthday Calendar (another Facebook app), and World Winner, a standalone site. 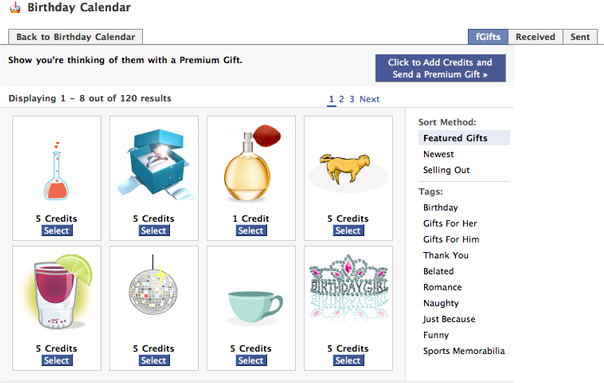 To help build up the library of goods it offers, Viximo has launched a community site for so-called “digital da-vincis” – the artists that craft each of these assets. Using tools on the site (along with their own art programs), artists craft and then upload digital assets which are placed in an online gallery. Third party publishers can browse through these galleries looking for virtual goods they’d like to include on their sites. If an artist’s item gets chosen, they will receive 20% of every purchase (their names will also be included alongside the image for attribution).

Viximo has built a powerful platform that should appeal to a number of social applications and websites alike, but it also has some potential flaws. Every site that implements Viximo has the option of allowing it to be a ‘universal giftbox’ – meaning that a gift given on one site will also appear on another site. But they can also choose to tie their gifts exclusively to their own sites. This could become frustrating on Facebook profiles, as each application could potentially have its own giftbox, which would be both confusing and ugly.