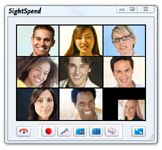 Switzerland-based Logitech, maker of personal computer peripherals, is entering the software market by acquiring internet video communications services provider SightSpeed for $30 million in cash. The deal is expected to close in early November.

The acquisition of the 25-person company, born out of a Cornell University lab, is a result of Logitech looking to complement their hardware solutions with solid video communication technology in combination with a R&D knowledge buy.

SightSpeed’s services, which are SIP-based and standards-compliant, comes with a free version and a premium version called SightSpeed Plus (for consumers) which costs $9.95 per month or $99.95 per year. The professional version costs $19.95 a month/$240 per person a year, and runs on Windows, Macintosh, and Linux.

This marks a third successful hand-off for SightSpeed CEO Peter Csathy, a digital media veteran who was previously involved with Musicmatch (acquired by Yahoo in 2004) and eNow/Relegence (acquired by AOL in 2006).

SightSpeed raised $1+ million from Roda Group of Berkeley and BR Ventures back in February 2003 and had reportedly been in talks with venture capitalists to raise a additional Series B round last summer. The privately-held company struck a major deal in June 2008 when it announced it would be integrating a video chat application into Dell laptops.