Issuu just announced it has raised $5 million in a Series B investment from Sunstone Capital, which had already provided Series A funding to the amount of $1.25 million in early 2007. The Copenhagen, Denmark-based startup has also added a slew of new features to its existing product and launched a premium version for professional publishers.

When we first came across Issuu, which turns uploaded documents into interactive online publications for free, we said it was one of the first service of its kind that didn’t suck. In addition to the funding announcement, the company is also releasing a major product update.

Issuu has vastly improved the search functionality, making it much faster, more engaging and easier to filter search results. Also nice is a feature they call ‘search-based remix’: a way for individual search results to be displayed as a custom magazine, in combination with a contextual tag cloud to help tweak results.  It creates a custom digital magazine on the fly from all public Issuu documents.   Try it out with this example on a search for “car.” Other notable enhancements include an easier way to manage your ‘library’ of documents, a new statistics application with more analytics reports, support for more document formats, a bulk upload feature and a way to make documents downloadable and accompanied by music.

The company also recently announced a developer platform aptly named Issuu Platform which documents how publishers can customize the viewer application using their markup language. As of today, the platform also features a Search API which enables developers to search Issuu’s database using REST requests and XML or JSON responses, and an API for its Viewer product, which enables the publication viewer to be controlled from within the host web page using JavaScript method calls and events.

Last but not least: the company has made an obvious move by adding a revenue model to their service. Starting today, Issuu Pro offers a way for professional publishers to bring their magazines and newspapers to the internet and enhance them with a variety of digital features and the ability to customize the viewing experience. Publications are ad-free (meaning no ads in the viewer from Issuu—any ads in the magazines or documents themselves remain), and publishers are only charged when their content is viewed, with pricing ranging from $1.10 to $19 per 1,000 publication views. There’s also a new reseller program tailored to ad / web agencies, print shops, and media companies.

http://static.issuu.com/webembed/viewers/style1/v1/IssuuViewer.swf
Get your own – Open publication

Issuu has quite a few competitors trying to become the ‘YouTube for documents’, including Scribd, Docstoc and Calaméo. They now have an extra $5 million to fight it out for the title, and the released updates already make it a serious contender.  Although in this fight, it might do better to stick to the high-gloss niche where it excels.

Watch the video below to get an overview of what Issuu is all about. 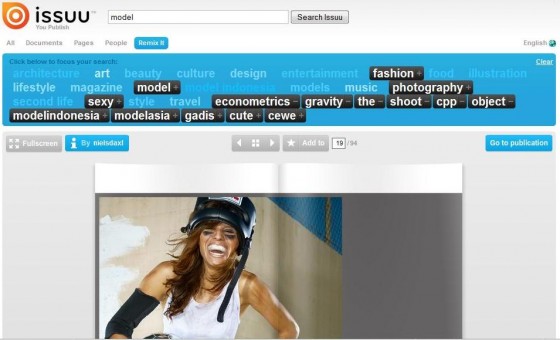