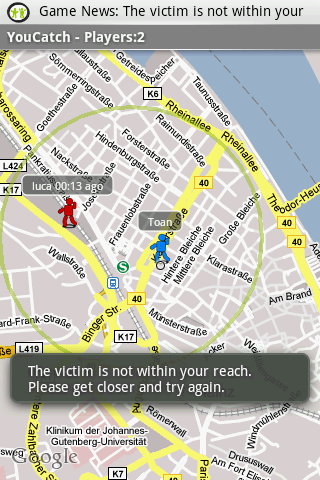 What makes a great Android app? One that melds the virtual world with the real world in a fun or informative way. One app that does that in an impressive fashion is called JOYity and it comes from Zelfi, a German mobile gaming startup. JOYity uses the GPS in the Android phone to let you play games and go on adventures based on your location in the real world.

JOYity is a gaming platform in its own right. When you download the app you can play one of three games (YouCatch, Roads of San Francisco, City Race Munich) or design your own. In Roads of San Francisco, for instance, you have to go around the city picking up clues. When you get to a destination, a text or picture message tells you where to go next. It is a Scavenger Hunt with a story line. You can also design your own Scavenger Hunt games and play them with large groups of people.

Another game that comes with JOYity, YouCatch, is a version of Manhunt. Players in the same city sign up for a game. Everyone acts as both hunter and hunted at the same time. The game assigns you a player that you are hunting, while assigning you to someone else as a victim. Everyone’s location is periodically flashed on the map. When you get within 25 feet of your victim, you press the scrollball on the phone for the kill. But every time you press the button, your location is shown to all the other players as well. The last person standing wins.

Below are two video reviews from AppVee. The first is of JOYity itself and Roads of San Francisco. The second is of YouCatch, and it shows the game actually being played in Madison Square Park in New York City. AppVee was similarly impressed by JOYity, describing it as a “massive multiplayer trans-reality game.” For more Android video reviews, see our previous posts here and here. JOYity wasn’t on my original top-ten list of Android apps because it hadn’t hit teh Andrpoid market yet, but it would definitely be on that list now.