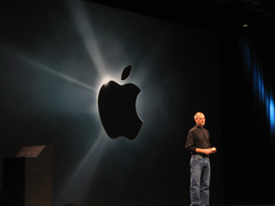 Amongst many things, Steve Jobs is a master story teller. Every year he delivers two signature keynotes: one at MacWorld in January and one at Apple‘s World Wide Developer Conference in June. However, these keynotes are more than just new product introductions. They are true stage craft and accordingly they have become major media events. Job’s keynotes happen so infrequently and are so central to Apple that their importance cannot be understated. A great keynote sets the tone for the year to come. This happened at MacWorld 2007, where Jobs announced the AppleTV and the iPhone. At the same time, a weak keynote can be a significant disappointment. This happened at MacWorld 2008, where Steve showed the world the MacBook Air for the first time. Given how important keynotes are for Apple, and that updated MacBooks and MacBook Pros all but complete Apple’s 2008 holiday product line up, the question now turns to this: What will Steve Jobs talk about during his keynote at MacWorld 2009?

I have no insider knowledge of Apple or its products, so analyzing Apple is a bit like reading tea leaves. But one particularly interesting tool in understanding the introduction of Apple products is MacRumors‘ Mac Buyer’s Guide. Looking at the buyer’s guide, it is clear that almost all of Apple’s consumer facing products have been refreshed, with the exception of the iMac, Mac Mini, Apple’s Cinema displays, and Mac Pros. Both the iMac and Mac Mini lines are likely to be refreshed any day now, whereas Apple’s monitors have been partially refreshed with the introduction of a 24″ LED Cinema Display monitor equipped with a DisplayPort. So, three obvious things that Jobs is likely to introduce in January are new Mac Pros, the 17″ MacBook Pro, and additional LED displays. This would unify Apple under the display port interface, something that Jobs stated as a goal for the company during Apple’s October Laptop event.

It is also likely that during the MacWorld 2009 keynote, Jobs will talk about Apple’s software. It is natural to expect that Apple’s the 2009 versions of the iLife suite of photo, video and music editing software, the iWork office productivity suite will be launched at MacWorld 2009. This is especially true given that the rumors suggesting that Apple would announce these software packages at its October laptop event turned out to be false. Normally such an announcement would not be very interesting. However, MobileMe, even with all its failed promise, could make the announcement of iLife and iWork ’09 far more exciting. If its over-the-air syncing platform were integrated into a cloud based collaboration platform for Apple’s iWork, iLife, and professional applications, this would to create a truly powerful user experience, and especially differentiate iWork from other office productivity suites. I am sure that Steve will given an update on OS 10.6, Snow Leopard, during MacWorld 2009, because at WWDC 2008, he said that the next version of Apple’s operating system would be released during the second quarter of 2009.

Three other less likely product introductions at MacWorld 2009 are a larger iPhone/Web Pad, a revision to AppleTV which integrates the product into networked flat-screen televisions, and iPhone Nanos. This week saw an interesting story come out of the New York Times. The Times reported seeing traffic from an Apple product which has a screen resolution greater than that of an iPhone but less than that of a MacBook. This seems to correlate very well with reports of Apple building something that is akin to a new Newton, although whether it is a bigger iPhone or a MacBook Tablet is still any one’s guess. Leaving the product pipeline aside, a large touch screen product makes complete sense for Apple, especially given the amount of money invested in their multi-touch intellectual property, something that has been largely limited to the iPhone and simple motions on the MacBook and Macbook Pro. While the economics behind Apple branded flat-screen televisions seem questionable, Jason Calacanis claimed to know that Apple was going to announce Apple brand flat-panel TVs that are networked and have integrated AppleTV functionalities. Jobs continues to call the AppleTV a hobby, and given that it has been close to a year since the AppleTV was updated, some sort of revision to the product seems to be in order. Finally an iPhone Nano seems a natural extension to the current product mix. If using non-GAAP accounting, the iPhone made up 39% of Apple’s revenue during the third quarter of 2008. An iPhone Nano priced at $99, would sell at significant at volume, and speed Apple’s growth in the mobile space.

Finishing 2008, Apple has a tremendous set of products to offer, with the iPhone 3G, MacBook, and MacBook Pro being at the center of the mix. If Jobs only announces updates to the rest of Apple’s core products, refreshes Apple’s software, and reveals more information about OSX 10.6, he would have extremely good content for his keynote. But, any one of the three products floating around the Apple rumor mill would make his keynote at MacWorld 2009 one to remember. Even without them, though, Apple is poised to have great product line up during the beginning of 2009.