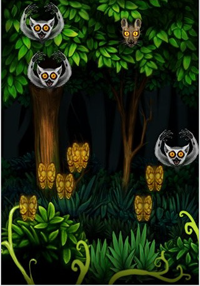 If you’re looking for a fun, relaxing iPhone game, don’t get Puzzllotto, the first application to come out of developer Mike Lee’s United Lemur development house. The $5 app is more puzzle than it is game, and is ridiculously frustrating – I’ve spent the last 15 minutes cursing at my phone repeatedly. But there’s a pretty nice reward for anyone who can endure Puzzllotto long enough to beat it: United Lemur is giving away thousands of dollars to the first person to solve the puzzle. For every day since the game’s release, the reward (which currently stands at $1000) will increase by another $1000, with a maximum of $30,000 available. And this isn’t just a clever marketing ploy for an impossible puzzle – if nobody claims the prize by the end of the 30 days, United Lemur will donate that $30,000 to charity.

The game comes with no instructions to speak of: you’re simply presented with a lushly drawn jungle with some blinking eyes, and a looping soundtrack filled with animal noises. Tapping on the blinking eyes occasionally reveals butterflies and lemurs, and you have to tap them in the right order if you’d like to keep advancing in the puzzle. It’s all trial and error, and one mistake resets the level. I can’t recommend Puzzllotto as a $5 game – there are far better options available on the App Store. But if you think you can beat everyone else to the punch and win the grand prize, a $5 buy-in isn’t too bad.

The game serves as an introduction to United Lemur, a development company that was founded by Mike Lee after he was ejected from Tapulous (which he co-founded). The company is currently working on at least two more apps, which are said to be much more full-featured than Puzzllotto (Lee also says that a “more fun” version of the game will be released as a free update once the competition is over, as some features have been omitted for the puzzle version).

Thanks to 148Apps.com and Daniel Brusilovsky for the tip.