It might be too little, too late to launch a political news site. The U.S. election is only 11 days away, and interest in politics will taper off from the fever-high pitch we see now. But that’s not stopping Politics.com, which just launched yesterday as user-submitted site for political news, blog posts, and Youtube videos. It is kind of The Huffington Post meets Digg. 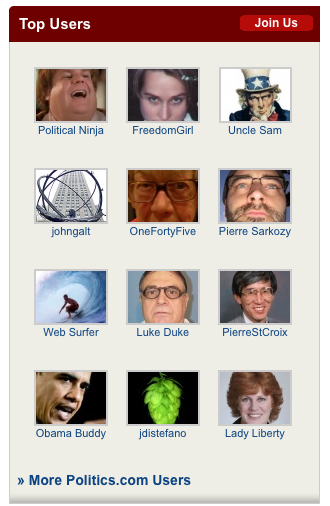 The site is run by a company in Virginia called Politics, but the URL has passed through many hands in the past. The current iteration is simple but effective. The homepage places articles from mainstream news organizations front and center, with sidebars featuring the most active users and the “Best of the Blogs.” Videos are at the bottom. There are also tabs for “news,” “blogs,” “users,” and “topics.” That’s it.

Users submit stories, blog posts, and videos. Those that get the most “endorsements” hit the front page, where readers can see the headline, the source, a one-sentence description, and who submitted it. Videos can come from YouTube or be uploaded directly.

The site would have been better off launching during the primaries so that it could have had nine months to build up a following. With these things it’s all about the users. (Who do you think would win in a fight, Political Ninja or FreedomGirl? My money is on FreedomGirl).

But it looks more like a domain play. Politics.com is obviously a valuable domain, and putting up a user-generated news site is certainly a better idea than parking ads there. But you’ve got to wonder how much they paid for that domain. 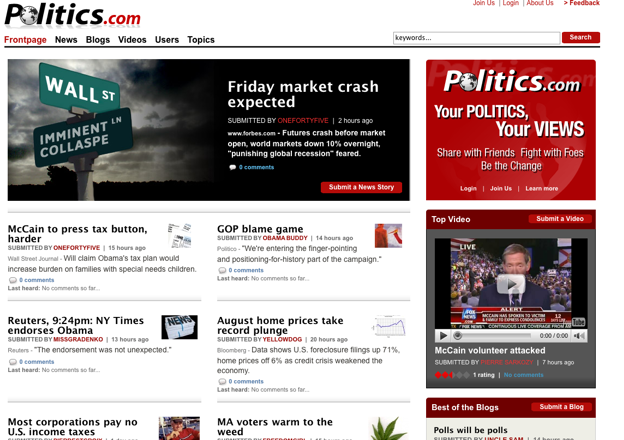