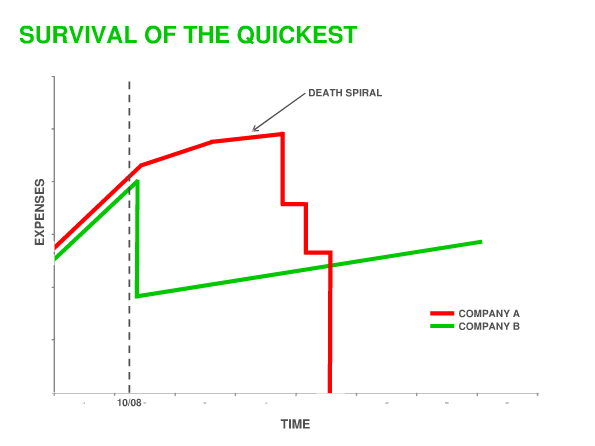 This has been a brutal month or so for tech layoffs. According to our Layoff Tracker, there have been 19,683 job eliminations at tech companies announced since mid-September, and we’re not even counting the 24,600 people at Hewlett-Packard who are being eliminated as a result of its merger with EDS.

After stripping those out, you get closer to a pure number of layoffs at tech startups: 573

That is the equivalent of about 57 startups with ten people each. And those are just the ones that we or other news outlets have been able to confirm. Our list of tips is much longer than that and we are working through it to confirm as many as we can. For instance, Cake Financial has laid off 30 percent of its staff, or 6 people.

Another company with unreported layoffs earlier this week was Meraki, which I’ve confirmed let go 20 percent of its staff (10 people). That makes Meraki the third Sequoia-backed company to announce layoffs this week. (The other two were Mahalo and imeem). Sequoia urged all of its portfolio companies to make cut-backs earlier this month.

At least most of these startups are already done with their layoffs, unlike Yahoo which announced a 10 percent cut is coming but won’t say who exactly is losing their jobs for another few weeks. Layoffs are bad enough, but don’t prolong the misery.

This past week alone, tech companies have laid off 13,809 people:

If you know of any layoffs at a tech company, please submit a tip with the name of the company and number of layoffs. If it’s been covered, also send a link to the blog post or news article.