24 hours have passed since the launch of the Android Market, the Google equivalent to Apple’s App Store. Medialets has conducted a thorough analysis of the two store launches. The verdict: the size of Android Market pales in comparison to Apple’s store at launch, and won’t allow for paid applications until next year. But the stores are more alike than they are different, with very similar applications launching on both platforms, and an overwhelming focus on games.

Android Market launched with a total of 62 applications, all thoroughly vetted by Google (we’ve heard that Google only wanted to launch with the cream of the crop, but will relax the process in the future). In comparison Apple’s store launched with around 552 total applications that had to go through a lengthy approval process that Apple continues to enforce. 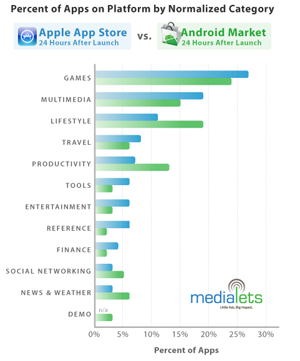 Because both app stores obscure the total number of downloads every application sees, it’s difficult to gauge exactly how popular each app is. When Apple’s store first launched everyone could view exactly how many people had downloaded a given application, but this data was removed less than a day after launch (now the best estimate is to look at the total number of reviews). Android’s store has some very vague popularity descriptions: you can see if an app falls within a certain range (100-500, 500-1000, etc.) but above 10,000 downloads apps simply fall in the overly broad “10,000-50,000” bracket.

Medialets reports that nine applications made it to this top bracket on Android, with ShopSavvy (an application that allows user to take a photo of a barcode to compare a product’s price with other stores) taking the top spot. Apple’s most popular app at launch was its iPhone Remote, which allows users to control their iTunes library remotely. Only three of the top nine apps in Android’s store are games, but games are still the dominant presence on the store as they are in iTunes.

It’s possible that this skew towards games is a result of developers trying to approach Android the same way as they approached the iPhone, which may wind up being a mistake. Apple has openly embraced the store’s emphasis on gaming, heavily advertising “the funnest iPod ever”. Android phones (particularly the G1) appeal to a different market – one that cares less about aesthetics and fun and more about flexibility and a built-in keyboard. Don’t be surprised if games wind up being significantly less popular on the Android marketplace.

To get a taste of what’s available on Android, check out our top 10 picks, along with AppVee’s video reviews. For more analysis, check out the Medialets report here. 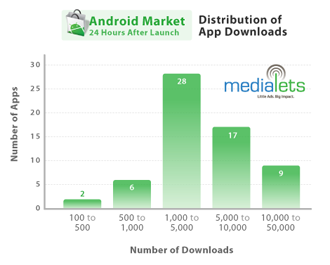