Metaplace, a startup that allows users to craft their own virtual worlds, has closed a $6.7 million funding round led by Charles River Ventures and Cresendo Ventures along with Marc Andreessen and Ben Horowitz. The round brings Metaplace’s total funding to $9.4 million. Alongside today’s announcement the site is also opening an invite-only private beta, and 200 TechCrunch readers can sign up immediately by going here and entering the code “MPTECHCRUNCH”.

Metaplace (which was formerly known as Areae) is building a platform that allows users to build their own Flash-based virtual worlds, and caters to both novice and experienced gamers alike. New players who’d just like to throw something together can drag and drop items from the site’s marketplace, much as they would in the game The Sims. More experienced users can choose to create and submit their own designs to the marketplace. And for experienced programmers, the site features a full scripting engine (similar to what is found in Second Life), allowing users to create entirely new gameplay features.

It’s an ambitious project to be sure, but it’s headed by industry veterans behind some of the biggest massively multiplayer games ever released, including Ultima Online (a precursor to Everquest and World of Warcraft that continues to have an avid following a decade after its release). Users have already created worlds ranging from Zombie-filled graveyards to puzzles and platformers. We’ll have a more thorough review once the game launches to the public and is more feature-complete.

Metaplace will be facing some stiff competition. This is a very crowded space, with browser-based virtual worlds from the likes of Second Life, Google’s Lively, and WebFlock, along with a host of worlds that are geared towards a younger crowd. 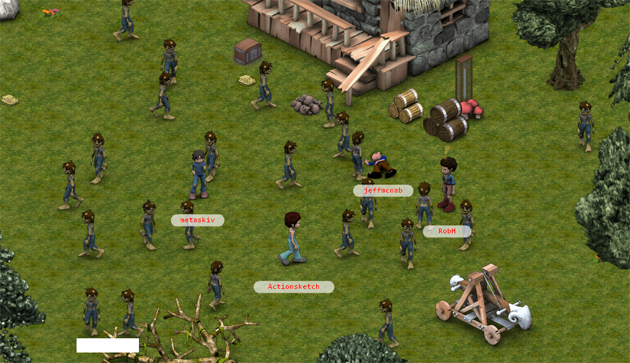