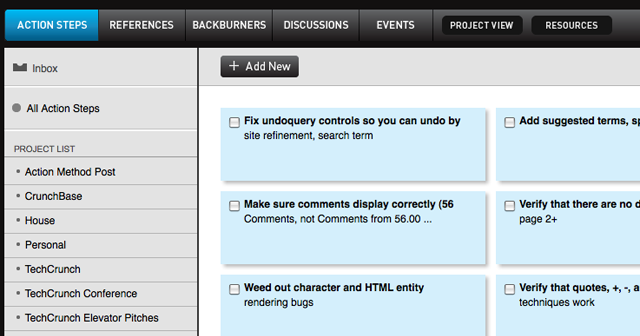 Behance, a New York-based company with a range of services for creative professionals, has always had a thing for keeping people organized. Its Behance Network enables designers to upload and assemble their work into online portfolios that can be shared with both potential clients and the larger creative community. And Behance’s stylish Outfitter line of paper products, which includes notebooks, cards and stickers, helps people keep track of tasks the old fashioned way.

Behance has now debuted an excellent new product called Action Method that will appeal to creative and non-creative individuals alike who wish to organize and collaborate on projects more effectively. Action Method is partly a new stab at solving the same problems addressed by Basecamp and several other project managers, and it’s partly another online to-do list.

The beauty of Action Method lies in the flexibility it affords each of its users to organize his or her tasks. The central component is the “action step”, the virtual equivalent of a Post-it note that can be used to jot down a description of something that needs to get done. Each action step is assigned to a project, where it will be displayed alongside all other steps in the project. The steps can be labeled with one of three colors (blue, red, or silver) and prioritized based on when they’re due.

When you want to delegate a task to someone else, you simply enter that person’s email address and they will get a notification about it. If they accept, they’ll have the opportunity to file the task away into the project of their choosing (collaborators are not forced to organize tasks into the same project buckets). They can also choose to decline a task, sending it back to the original delegator with a short explanation.

While tasks (er, steps) are central, Action Method comes with a suite of other ways to communicate and keep track of projects. So-called “reference” sheets are like wikis that can be used to share notes, links and attachments. A “backburner” area lets you post notes that aren’t necessarily tasks that need to get done. You can participate with others in a forum-like area called “discussions”. And you can put down simple events that serve as larger milestones for your projects (launch dates, meetings, etc).

All of your activity across these tools is recorded and displayed in an activity feed area. You can choose to share your activity on Action Method with others or simply use the feed as a way to track your progress (see when you finished or delegated tasks, for example). 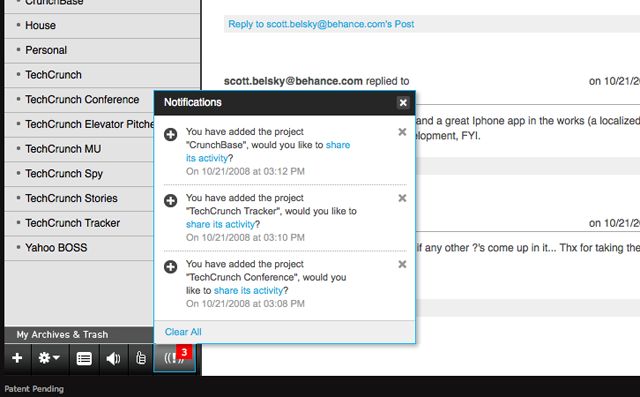 Action Method doesn’t really have an internal messaging system (which is a little unfortunate) but you can send others little “nags” that reminds them of what you need done in less than 125 characters. Conversely, you can send little “appreciate” notes that inform others that you dig their work ethic.

This is a new product so there are a number of things that I’d like to see improved or added. Each step/task could use a greater range of formatting options (bullets, italics, etc). It would also be helpful if steps could be displayed in list format as opposed to their default Post-it note grid format. And it would be useful if users could delegate tasks that need ongoing action, share in the responsibility of fulfilling certain tasks, or put a task up-for-grabs within particular groups.

For those who start using Action Method to organize their lives (which includes myself), Behance has an iPhone app in the works and has already released an AIR version that basically reduces the amount of browser chrome. It would be helpful if the AIR app also came in a smaller form factor a la Twhirl or Yammer.

Action Method is free for up to 50 action steps, after which you need to sign up for the premium version that costs $12/month or $99/year.