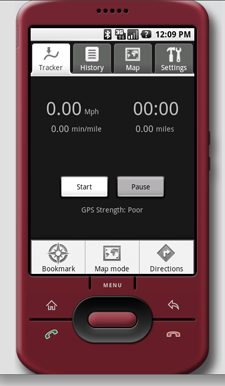 With the impending release of the first phone to feature Google’s Android platfrom, we’re beginning to see a few of the first apps that will be available through Google’s Android Market. Among these is SugarTrip, an application that takes an innovative approach to measuring street traffic by taking advantage of the GPS units that will be integrated into most Android phones.

As users drive their cars, SugarTrip will measure how quickly they’re traveling and report their speeds back to a central server. The company says that while the traffic updates available on sites like Google Maps do an acceptable job, they are only useful on interstate highways and rely on computer models based on only a few datapoints. Conversely SugarTrip will be able to provide data on far more streets with many more data points (assuming the application can establish a significant user base).

Users will be able to monitor their trips online, where they can see when they hit traffic and can plan better routes for future trips accordingly. The app will also allow users to view routes taken by others, and to pinpoint their car on a map when they park so that they can find it later (there’s a similar application available on the iPhone that does this).

The company is promoting SugarTrip as a “green” app, as it should help cut back on pollution if it keeps cars from sitting in traffic. The application will be free, with plans to monetize eventually using geo-targeted advertising. SugarTrip is hoping to have the application ready for the G1’s launch on October 22, but will be available soon thereafter if it doesn’t make the cut.