The layoffs keep rolling in. The latest startup to cut back is Hi5, the third largest social network. But you wouldn’t know it from reading the company’s blog, which touts some positive press coverage today:

During a down economy, things are looking up for hi5. Today hi5 was featured in Fortune.com, soon to arrive on news stands.

Yet on Monday, the 110-person company laid off 10 to 15 percent of its employees in what it is calling a “restructuring” move. A tipster told us that the cuts came mostly in Design, HR, and QA. I called to ask for a comment and Hi5’s VP of marketing Mike Trigg confirms:

We did a restructuring this week. We did let a few people go, but we are also hiring people.

The world changed for everybody dramatically last week. We are focused on growing our business. We have great momentum.

Trigg says Hi5 should not be lumped in with other startups that are cutting back right now in order to lower their burn rate and survive longer. With openings that the company is still trying to fill, he says the net effect on headcount will be close to neutral.

Hi5’s growth actually has flattened to around 56 million unique visitors worldwide, according to comScore (August figures). But it is still the third largest social network after Facebook and MySpace. 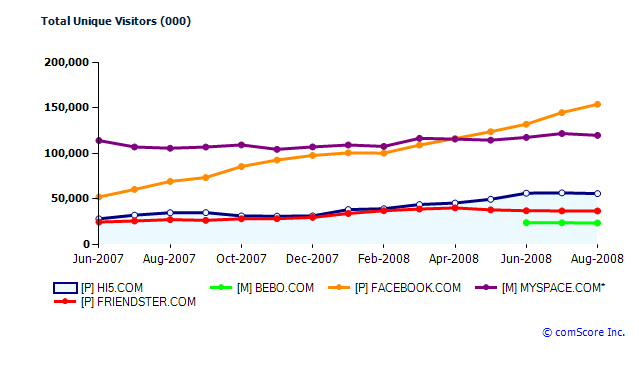